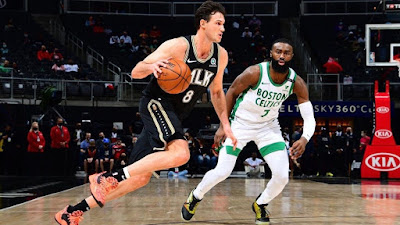 The Celtics scored first on a layup to open up the game Wednesday night, that was their first and only lead for the rest of the way, as they got blown out at State Farm Arena 127-112 to the Atlanta Hawks.
Danilo Gallinari scored a game-high 38 points on 13-of-16 shooting and hit 10-of-12 from 3 to break a franchise record for the most made 3's in a game, which was held by former All-Star Steve Smith with nine back in 1997.
The Hawks overall went 23-of-42, also breaking a team record and that was the most made 3's made the Celtics have ever allowed in their team history.
On a night where it seemed like Trae Young, who was snubbed from an All-Star selection, took out his frustrations on a struggling Celtics team -- he finished with 33 on 12-of-23 from the field and seven assists. John Collins chipped in 14 points and 11 rebounds to hand Boston their third straight loss.
Jaylen Brown led with 17 points, as the Celtics' starters shot 19-of-57 from the floor, including going 1-of-16 from behind the arc. Jeff Teague started in place of Kemba Walker (rest), adding 14 points, five assists and Tristan Thompson recorded a double-double of 13 points, 13 rebounds.
The Hawks led comfortably 72-49 at intermission, with Young doing most of his damage in the first two quarters; scoring 25 and the Celtics never got within any closer than 15 points in the second half.
Despite some points production from rookie Aaron Nesmith (13), Carsen Edwards (11) and Tremont Waters (11), Jayson Tatum was held to only 13 points on 4-of-20 made attempts and 1-of-8 from 3.

"It got away from us early," Tatum said during his post-game presser. "They played well and made a bunch of shots. But we didn't come with it today."

The Celtics went winless in their mini three-game road trip, dropping eight of their last 11 and are now two games below .500 at 15-17 with four games remaining before the All-Star break.

"These are four very important games," Tatum said on the team's sense of urgency. "We've got to dig deep and figure it out."

Atlanta hit 52.9 percent of their shots and 54.8% of their 3's, while the Celtics made 44.2% of their attempts and 25.8% from 3-point territory.
Boston will return to TD Garden and host the Indiana Pacers (15-15) Friday night, with a 7:30 pm EST scheduled tip-off on ESPN.
Game Notes:
The Hawks out-rebounded the Celtics 56-43, but Boston outscored Atlanta 58-42 in the paint. Marcus Smart, who has missed the last 14 games with a calf injury, picked up a technical foul in the second quarter from the bench.