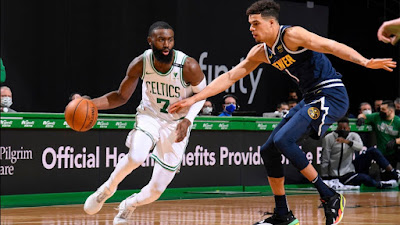 Coming off back-to-back disappointing efforts, and entering the game with a 3-7 record over their last 10 contests, the Celtics rebounded Wednesday night defeating the Denver Nuggets, 112-99, at home.
Jaylen Brown once again led the way with a team-high 27 points (11-of-20), which helped fuel Boston's much-needed victory. Jayson Tatum finished with 21 points, six rebounds, and eight assists while Kemba Walker added 17 points (5-of-13 shooting).
The Celtics had no answer for Nikola Jokic, who finished with a game-high of 43 points on an efficient 16-of-23 shooting. Jamal Murray added 25 points, but his nine turnovers proved to be costly. Facundo Campazzo also contributed with 15 points off the bench for the Nuggets (15-12).
With many contemplating whether the Celtics hit "rock bottom" after Sunday's disappointing loss against the Washington Wizards, Jaylen Brown knew how important this game was.

"We just lost two bad ones. I think it was obvious we needed a win tonight," said Brown during his postgame presser. "We needed to come out with some energy. And for the most part we did."

Much like their previous two games, the Celtics looked sluggish early on, as the Nuggets started out with a quick 7-2 run. As the quarter progressed, Walker looked more like his normal self, scoring nine points in the first. With Tatum struggling from the field, Brown took more of the load offensively, tallying seven points.
While their first-quarter scoring was encouraging, the Celtics' defense struggled to defend Jokic, who erupted with 15 points on a perfect 6-of-6 shooting -- scoring over half of the Nuggets' points.
Logging 28 minutes in his previous game, rookie Aaron Nesmith showed promise early on with four points and a chase-down block on R.J Hampton late in the first.
Excelling at both ends (+20 plus-minus), Nesmith took advantage of his opportunity scoring nine points in 24 minutes. Contributing to the Celtics' improved effort on both ends, Stevens praised Nesmith's development after his best game as a pro.

"He's obviously becoming more comfortable with the speed of the game on the offensive end," said coach Brad Stevens postgame. "Credit to him, he's just kept working. When a guy gets that opportunity you really want to see him succeed."

After a close first quarter, the Celtics got some energy from their second unit led by Payton Pritchard. Knocking down a three-pointer on the team's first possession, Pritchard set Robert Williams up for a thunderous alley-oop slam that forced Denver into a timeout early.
Although Tatum struggled shooting early making only 1-of-7 shots, he still managed to make it into the highlight reel with his passing. Losing control of the ball after Jokic's strip, Tatum dove on the floor to recover the loose ball and delivered a strike to Jaylen Brown for an open dunk while sitting down.
Only a few days removed after Walker's comments stating his team needed to play harder, the Celtics played with much more heart during Wednesday night's victory diving for loose balls and bringing more intensity on defense, which Walker took notice of.

"We got back to Celtics basketball. Just playing hard and things fall into place. When you play hard, and you play the right way, you play for your teammates, and you play to win the game, great things just happen for you. That's what happened today," said Walker during his post-game connect interview for Celtics.com.

Despite the Celtics' bench contributing with 20 points on 8-of-10 shooting in the first-half, Jokic kept the Nuggets afloat. Scoring 12 points alone in the second quarter, his 29 total points helped spark Denver's 21-11 run to end the second quarter--cutting Boston's once 15-point lead in the first-half down to only five.
Even though the Celtics didn't end the quarter on a high note, the team's improved passing was on full display-- finishing with 14 assists on 21 baskets as a team. With recent struggles of ball movement, Brown was happy to see how his teammates adjusted after a stretch of bad losses.

"This was a great win for us, a game where we moved the ball, made some plays. We were really trying to find each other," said Brown during a postgame interview with NBC Sports Boston's Chris Forsberg. "Let's keep building on this."

Jokic continued his offensive outburst, adding another 10 points in the third quarter. Kemba Walker kicked things off for the Celtics with a quick three-pointer on the first possession, but Murray quickly responded with a fadeaway jumper on the other end.
The Celtics, who had nine turnovers in the first-half, committed six turnovers alone in the third quarter, which helped the Nuggets stay in the game behind Murray's hot three-point shooting. Luckily for the Celtics, Brown (10 points in the third) also caught fire with back-to-back three pointers late to lead the Celtics to a 15-4 run to end the third quarter.
Dominating the Celtics through the first three quarters, Jokic cooled down in the fourth, only scoring four points against Boston's bigs. Brown knocked down two key three-point shots down the stretch, and Tatum's six points in the quarter helped finish off the Nuggets. After a stretch of bad losses against the Wizards, Pistons, and Jazz, the Celtics finally had something encouraging to build off of.

"We need wins like that. Some wins against good opponents that fire us up because that can carry over. Let's see if we can build off of it," said Brown to reporters.

The Celtics, who are already missing Marcus Smart (calf) and Daniel Theis (finger), will look to find some consistency with their effort and playmaking Wednesday night against the Atlanta Hawks at TD Garden. Tip-off is scheduled for 7:30 P.M and is available to stream on NBC Sports Boston.
Game Notes:
The Celtics won the rebound battle 43-28 and outshot the Nuggets from downtown (35.7% to 26.5%). Boston also shot 48.1% from the field, while Denver hit 45.2% from the floor.
The Celtics added 26 assists on 39 made shots, but committed 20 turnovers. The Nuggets had 25 assists on 38 made field goals and finished with 17 turnovers.
Ian Carrano
Follow @IC_Sports1