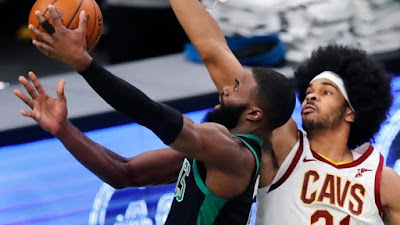 Jaylen Brown made sure the Celtics held on to a double-digit halftime lead, after scoring 20 of his 33 points in the third quarter on the way to a blowout 141-103 win over the Cleveland Cavaliers Sunday night at TD Garden.
Brown shot 13-20 from the field, including going 3-4 from behind the arc all in only 19 minutes of action, setting a new NBA record for the most points in the least amount of time (shot clock era). The Celtics guard-forward has now scored 25 points or more in fourth consecutive games, setting a new career-high.

"We needed a win, Brown said. "We lost three in a row. Being back on the floor, we wanted to make sure we came out with great intensity and we did."

Kemba Walker, who is still on a minute restriction, finished with 21 points, Carsen Edwards added 18 points, while Daniel Theis netted 17 for Boston to snap a three-game skid.
Collin Sexton led the Cavaliers (8-8) with 13 points, scoring less than 20 for the first time this season and far below his points-per game average of 26.8, as Cleveland got their three-winning streak snapped after back-to-back impressive wins over the Brooklyn Nets in which they tallied 147 and 125 points respectively.
Boston essentially lead wire-to-wire after the Cavs struck first to take a 2-0 lead before the Celtics went on a 11-0 run and never looked back, posting a season-high in points to end the first quarter (38) and in a half -- with a 73-51 advantage by intermission.

"I thought our defensive intensity was good for most of the game and I thought our offense fed off of it," said Brad Stevens.

The Cavaliers seemed to waive the white flag following 15 unanswered Celtics points midway through the third quarter and Brown pushed the lead 106-70 with 3:22 left in the period after one last 3-pointer to cap off his record setting night.

"He's in a great rhythm scoring," Stevens said of Brown.

Boston was once again without Jayson Tatum for the fifth straight game and Payton Pritchard (MCL sprain), but still manage to hit 55.9% of their field goals, including 14-28 from 3 (50%), while limiting the Cavs to 40% shooting (30.3% from 3) and winning the battle of the boards 60-45.
The Celtics will head out to Chicago Monday night to face the Bulls (7-9), before traveling to San Antonio on Wednesday.
Game Notes:
Marcus Smart (12 points) had a game-high nine dimes, as Boston finished with 26 total assists on 52 made baskets and outscored the Cavs 54-42 in the paint. Boston also forced 17 turnovers (14 steals) and converted them into 18 points.
Joel Pavón
Follow @Joe1_CSP