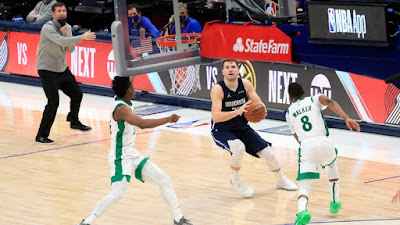 The Celtics nearly pulled off a double-digit comeback Tuesday night at the American Airlines Center, but it was too much Luka Doncic to overcome down the stretch, as he hit the game-winner from behind the arc in a 110-107 loss to the Dallas Mavericks.
Jaylen Brown, who almost singlehandedly cut an 11-point deficit and put Boston ahead by one in the final minute of the game, finished with 29 points on 12-of-20 from the field to go along with seven rebounds and five assists.
Doncic answered with a tough 3-pointer over Daniel Theis and Brown tied it up on a quick layup, leaving 9.5 seconds remaining before the Mavericks' lone All-Star hit a tie-breaking 3 with 0.1 left on the clock to avoid a fourth quarter collapse and hand the Celtics another disappointing loss.
Jayson Tatum scored 28 points and Kemba Walker went 8-of-19 for 21 points -- 14 of which came in the final frame -- as Boston is now 15-16 and below .500 for the first time since their were 1-2 to start the season. The Celtics came into Dallas having blown a 24-point lead against the Pelicans in the second half on Sunday and find themselves under .500 after 30-plus games for the first time since the 2014-15 campaign.

"It took two tremendous shots by a great player to beat us," coach Brad Stevens said postgame. "Obviously that's another heartbreaking loss. But that feels a little bit different than it did Sunday."

Doncic shot 11-of-23 from the floor, including going 6-of-8 from deep to give the 15-15 Mavs their seventh win in nine games. Jalen Brunson hit five 3's on his way to 22 points off the bench and Josh Richardson added 16 points in route to hand the Celtics their second straight loss.
In a back-and-forth night which featured four lead changes in the final 40 seconds, both teams had nearly identical stats in shooting percentage (47%), defensive rebounds (30), assists (19) and made free-throws (13), the Mavericks (13) had one made 3-pointer more than the Celtics (12) that proved to be difference maker.
Before tip-off the NBA announced the East and West All-Star reserves, with Jaylen Brown getting his first nod and Jayson Tatum being selected for a second straight year. The Celtics dynamic duo becomes the first teammate pair in franchise history to head to the mid-season classic under the age of 25 since Bob Cousy and Ed Macauley in 1953.

"I don't feel very much like an All-Star because we're below .500," Brown said in his post-game presser. "I think this is the most I've lost since I've been here. I'm hopeful that we'll string some games together and make a run. It's very much in our grasp to do so."

The Celtics will conclude their three-game mini road trip on Wednesday night in Atlanta. Tip-off against the Hawks (13-18) for a third time in eight days will be 7:30 pm EST.
Game Notes:
Boston out-rebounded the Mavericks 53-46 and outscored them in the paint 50-48, but loss the turnover battle 13-10.
Joel Pavón
Follow @Joe1_CSP