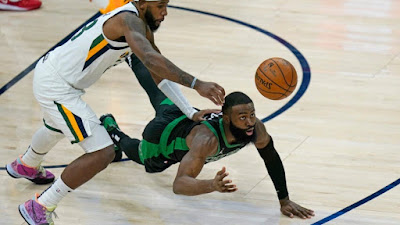 Jaylen Brown didn't mince words following the Celtics 122-108 loss to the Utah Jazz Tuesday night, as a comeback rally fell well short in the final three minutes.
After being down by as many as 14 in a third quarter where the Jazz scored 42 points, the Celtics cut the double-digit deficit down to four with 3:10 left to play only to be on the opposite end of 14-4 run to end the game.

"We fucking should take it personally, Brown said. "The fourth quarter was embarrassing. That's the time we are supposed to be our grittiest and it seems like we just fell apart in a sense. That's a lack of toughness and a lack of leadership, and a lot of that is on me. As a leader of this team, I take responsibility for how we respond and how we come out and in the fourth quarter. It just wasn't there for us."

Brown finished with 33 points on 12-of-22 shooting (3-6 from 3) after missing the last two games with left knee soreness. He did mention to reporters that his knee had been bothering him for "a couple of weeks now" and he briefly experienced a flair up in the third quarter, but overall felt much better.
After a strong first quarter start with seven made 3-pointers, which included three straight from Brown to take a 27-19 advantage into the second period, the Celtics never regained a lead once the Jazz clamped down on defense. Mitchell scored 14 in the third quarter and 10 of his 36 points in late in the fourth including two dagger 3's, plus back-to-back alley oop lobs to Rudy Gobert for the exclamation point in the final minute to close out Boston, who wrapped-up their five-game west road trip at 2-3.

"Defensively we made too many mistakes," Brown said. "They got what they wanted. Fourth quarter we're supposed to be at our best defensively and that was almost our worst tonight, so that's the reason why we lost the game."

Brown noted that clearly the Jazz, who have the league's best record at 20-5, seem like a team on a mission this season following their disappointing loss in Game 7 against the Denver Nuggets in the first round of the playoffs last fall -- where they had a 3-1 series lead before losing the last three.

"The way they played, the freedom, the flow they have to their team is really good right now, and we've got to find a better flow for ourselves," Brown said. "We had some disconnectedness at times and the game almost seems a little harder than it should be. … You could see the difference between Utah and us tonight. Even though we had some opportunities to take the lead and make a run, you can definitely see they have a smooth flow to their team right now."

The Celtics at 12-11 have lost four of their last eight, as they host the Toronto Raptors (11-13) Thursday night at TD Garden.