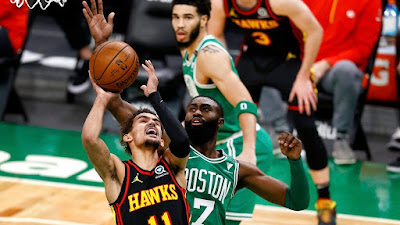 The Celtics down three starters were looking to win a back-to-back for only the second time this season, but Trae Young had other plans, as they fell to the Atlanta Hawks 122-114 at TD Garden Wednesday night.
Jayson Tatum scoring a team-high 35 points on 11-of-21 shooting wasn't enough to lead Boston, who trailed for nearly the entire game. Jaylen Brown struggled from the field (6-of-20) for 22 points, but did finished with seven assists. Tristan Thompson added 14 points and seven rebounds in a starting role for the injured Daniel Theis (finger sprain).
Boston at 14-14 played without a point guard to start, as Kemba Walker (rest) didn't suit up due to load management of hid left knee and Marcus Smart missed his 10th straight with a calf injury.
Outside of rookie Payton Pritchard -- 11 points in 23 minutes -- getting some run at the point and a very brief Jeff Teague sighting, Tatum (six assists) also played some point-forward for Brad Stevens.
All-Star Trae Young led all scorers 40 points on 14-of-20 shooting (4-of-9 from deep), while picking apart the Celtics' defense in the fourth quarter. Clint Capela notched a double-double of 24 points, 13 rebounds and John Collins had 20 points for the 12-16 Hawks, snapping a four-game skid.
Atlanta, minus Young, managed to put up 72 points on 68-percent shooting inside of the 3-point arc and score 60 points in the paint as a team -- taking full advantage of the Celtics' poor interior defense.

"I thought our perimeter defense made it really hard on our paint defense," Brad Stevens said. "Our guys protecting us, either rotating over or in pick-and-roll, there were a couple times where our bigs certainly got beat off the bounce and those type of things, but I'm not sure that we had a huge impact on them on the ball, certainly not the way that they impacted us."

The Hawks overall shot a season-high 57.1-percent from the field and led by as many as 13 points. Boston trailed 90-81 at the end of the third period, before using a 10-4 run to cut the deficit 94-91 to begin the final frame. Atlanta responded with an 8-2 spurt of their own to take a 102-93 advantage with 6:33 left to play.
Stevens tried to use the hack-a-Capela strategy by intentionally putting the Hawks big man on the free throw and stopping the clock. But Capela hit 3-of-7 from the charity stripe and Young followed it with a 3-pointer to put Atlanta up 108-95.
The Celtics attempted one final rally push after Tatum was fouled shooting a 3 and hit all three free throws to make it 118-113 with 13 seconds remaining. But that would be as close as they would get, as Collins went 4-of-4 from the free throw line to ice it for the Hawks and give them their first win against Boston in their last eight meetings.
The C's committed 27 fouls putting Atlanta on the free throw line 31 times that got converted into 26 points, and turned the ball over 16 times that led to an additional 15 points for the Hawks.

"It's tough going up and down," Brown said in his post-game presser. "But I still think there's a lot to learn, and we have learned a lot."

Boston will host the Hawks once again on Friday night at 7:30 pm EST, before heading on a three-game mini road trip.
Game Notes:
Celtics shot 46.5-percent from the field and 32.3-percent from behind the arc, while out-rebounding the Hawks 45-42, but got outscored in the paint 60-46. Boston also finished with 22 assist on40 made baskets. Atlanta hadn't beaten the C's since April 8, 2018, ending a seven-game losing streak.
Joel Pavón
Follow @Joe1_CSP