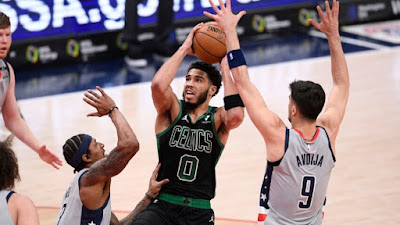 Jayson Tatum revealed Tuesday afternoon that his breathing is "a little out of whack" stemming from a bout with COVID-19 over a month ago.
The Celtics forward said he still has some issues breathing issues and that he tends to get fatigued a lot faster than before. Though Tatum detailed that his situation has improved since returning from health and safety protocol, he occasionally experiences lingering effects of the coronavirus.

"Just running up and down the court a few times, it's easier to get out of breath or tired a lot faster," Tatum told reporters Tuesday. "I've noticed that since I've had COVID. It's just something I'm working on. It's gotten better since the first game I played, but I still deal with it from time to time."

Prior to his initial positive test of the virus, Tatum was averaging 47.4% shooting from the field and 43.8% from behind the arc in 34.6 minutes per game. Since he’s returned, his shooting percentage has dropped to 42.7% from the floor and 36.9% from deep, while his minutes have increased to 36 per-contest.
Tatum shot 3-of-14 for a total of six points in the Celtics' 104-91 loss to the Washington Wizards Sunday afternoon and coach Brad Stevens could sense that something was a bit off with his young rising star.

"I thought he look tired. You guys have seen him. That wasn't him," Stevens said to reporters via Zoom. "He would never say that.

"Ever since he came back, we've tried to be on top of that," Stevens said about Tatum being honest on how he's feeling. "Specifically about moments of the game. Usually, you can see if guys are feeling the effects of fatigue."

While the breathing and fatigue issues don't usually affect him for an entire games, Tatum says it does come in spurts.

"It's just certain stretches where breathing is a little out of whack, and I talk to the medical staff and coaching staff about it," he said. "It's gotten better obviously from the first game I came back and played. I guess it's just a long process. I’ve talked to other guys that have had it, and they say they experienced the same thing, and it kind of just gets better over time. But as much as we play, I guess it takes a little bit longer."

The Celtics, who were 9-6 before Tatum tested positive for the illness and are 4-7 since his return, will look to snap a two game skid tonight when they host the Denver Nuggets.