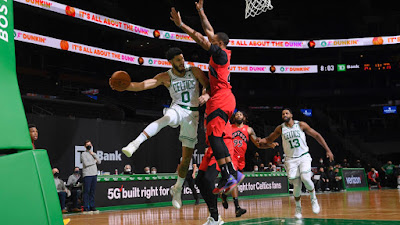 The Toronto Raptors' game-plan was simple Thursday night against the Celtics at TD Garden, contain the two leading scorers in Jayson Tatum and Jaylen Brown.
It was mission accomplished for the Raptors' defense, as the Celtics young rising stars shot a combined 8-of-27 from the field and were 1-of-7 on 3-point attempts, despite Boston getting a much needed 120-108 win at home.
However, Toronto was not prepared to stop Semi Ojeleye or Celtics rookie Payton Pritchard, who both hit 12 of the team's 20 3-pointers, plus Brown and Tatum were responsible for 19 of the C's 30 assists on the night.
When they couldn't find any offensive rhythm themselves -- scoring a combined 29 points -- Brown and Tatum proved their playmaking made the difference against a Raptors team that crawled back from a 19-point deficit to get within five halfway through the fourth quarter before the Celtics went on a 15-5 run to pull way for good.

"Our whole team knew and knows that Toronto does as good of a job as anybody in the league at loading up to great players, and they showed [Brown and Tatum] a lot of attention," Celtics head coach Brad Stevens said post-game. "[The Raptors are] helpful at the nail, they're helpful out of the corner, they're helpful all over and so you have to be a willing, quick decision-maker."

Brown finished with a career-high 10 assists and Tatum dished out nine, while finding teammates spaced the floor for open looks -- including Kemba Walker who shot 5-of-8 from behind the arc and finished with 20 points after coming off a rough road trip out west.

"[Brown and Tatum] are so talented and there is going to be so much attention on those guys, so they just made the right play tonight," said Walker, who scored 21 points. "They are very capable of that. Two special guys and they wanted to get guys involved, especially me. They really wanted to get me involved tonight because they know I've been struggling. So big ups to those guys, for real."

Ojeleye notched a career-high 24 points as a starter and Pritchard netted 20 points off the bench, becoming the first duo in franchise history to each hit six 3's in the same game.

Walker, Pritchard and Ojeleye were just the fourth trio of teammates in league history to hit five-3's on 60% shooting.
While both of the Celtics top-scorers in Tatum and Brown will continue to command attention from opposing defenses, they have to keep trusting their teammates to knock down the big shots for balanced scoring if this roster is going to make another deep playoff run.

"The better you get, the more attention you get and the more you have to make those plays," said Stevens. "Both those guys are in the group of players that draw a lot of attention and so it's something that they're gonna have to continue to do for us to be the best that we can be."