Kemba Walker on Celtics current state: 'We just are not good right now' 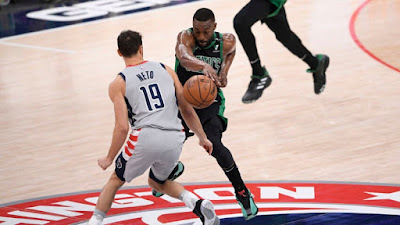 The Celtics dropped another matinee matchup in a 104-91 loss to the Washington Wizards Sunday afternoon at Capital One Arena.
Though there were not many positive takeaways for the Celtics, who have lost 10 of their last 15 games, coach Brad Stevens thought he waived the white flag when he pulled his starters with 5:18 left to play and a 101-76 deficit that seemed too much to overcome but his bench kept fighting.

"If we take anything from this game, we take the last five minutes and we clip up how that group that came in played together," Stevens said in his post-game presser. "How we pressured the ball, how we were communicative, especially Tacko on the backline, how we shared it, and even though we missed some shots, we got great looks.

"If our team can play more like that last five minutes, then we can be as good as we can be. If not, we will be average."

Boston in their second straight loss never found any offensive rhythm against the last place in the Eastern Conference Wizards, despite Kemba Walker and Jaylen Brown combining for 50 points on 20-of-39 shooting from the field and 6-of-12 from 3. As for the rest of the team they hit just 12-of-51 attempts, including 3-of-23 from deep and turned the ball over 17 times, while finishing with only 14 total assists.
On the defensive end, the Celtics limited the Wizards to 39.8% shooting and 23.3% on 3-point attempts, but still allowed Bradley Beal to score 35 points (10-of-18), plus role players Rui Hachimura and Mo Wagner to net a combined 26 points on 9-of-16 made field goals.

"It ain't many positives, I'm gonna be honest," said Walker, who finished with a season-high 25 points. "We just are not good right now."

Walker bounced back from his recent shooting slump to go 9-of-18 from the floor and 4-of-7 from 3-point territory, while Brown dropped 25 points on 11-of-21 from the field.
Outside of the team's defensive lapses, it didn't help matters much that the Celtics leading scorer in Jayson Tatum at 26.6 points per-contest this season, only managed six points on 3-of-14 shooting against Washington, as he was 26-of-76 in his pervious four games coming into Sunday.

"It's very controllable," Walker said. "I don't think it's anything that's uncontrollable. I think it's us as a whole, we just have to be better. I think I can do a better job just getting my teammates prepared to play a game. We'll get better. Some very disappointing losses. We're just not playing the way that we know we're capable of playing. That has to be fixed. And soon."

Brown, amidst the growing frustration, agreed that the Celtics at 13-13 can still turn it around even if it does feel like the team has hit rock bottom.

"I think we can flip things around at any moment" Brown said post-game. "I always have faith in this organization and team, and our coaching staff. We sucked today. We haven't played well over the last few games for whatever reason, but I believe we can turn it around at any moment."

The Celtics will look to snap their two-game skid when they host the Denver Nuggets on Tuesday night at TD Garden, tip-off is at 7 pm EST.