NBA executives reportedly believe the Celtics are 'up to something' 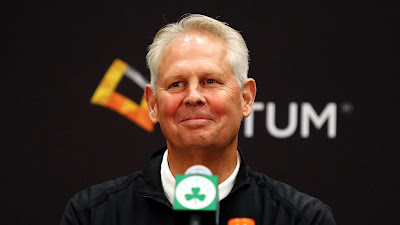 At 12-10, the Celtics have the fourth best record in the Eastern Conference and ninth overall, as it has been a rollercoaster start to the 2020-21 season.
With COVID-19 health and safety protocols, plus several injuries to the roster so far and with all things considered, the Celtics have withstood the punches.
Despite losing Gordon Hayward in the offseason to free agency and Danny Ainge not pulling the trigger on trading for James Harden and or Myles Turner, who the Celtics president of basketball operations had showed some interest in both prior, things could be worst for Boston after the first 22 games.
While Ainge has stated that it's tough to make a move before the team is still not fully healthy yet, it seems there is a need that the Celtics would like to fill sooner rather than later.

"I would say maybe shooting with size...We're looking for complete players obviously," Ainge said during his weekly radio appearance last Thursday, "but I think that shooting at the big position is something that we haven't had."

According to Kevin O'Connor of The Ringer, Ainge may not wait until the March 25 NBA trade deadline to improve the Celtics roster.

"Late Saturday evening, I received a flurry of texts from multiple executives around the league who said the Celtics were up to something," O'Connor wrote in this week's power rankings. "What they're up to is unclear, but league sources have long said Boston is searching for upgrades to bolster its wing and big man position."

It should not come as surprise that Ainge doesn't want to let another season go by without adding more talent around Jaylen Brown and Jayson Tatum, who are currently both playing at an All-NBA level to possibly make a run to get over the hump and get to the Finals.
Names that reportedly could be on Ainge's radar include John Collins of the Hawks, Magic big man Nikola Vucevic or Aaron Gordon (if healthy) and the Grizzlies' point-forward Kyle Anderson. The Celtics have a $28.5 million trade exception from the Hornets in the Hayward signing and a combination of assets that O'Connor points out could entice a number of teams.

"Tristan Thompson became trade eligible this weekend, and with a $9.3 million salary, he could be a perfect fit for a deal. So could Daniel Theis, with his expiring $5 million contract," he writes. "The Celtics have young players like Romeo Langford and Aaron Nesmith, in addition to all of their future first-round draft picks, which could position them to make a bid for a big fish such as Bradley Beal if he were to become available, or a role player like P.J. Tucker or Thaddeus Young."