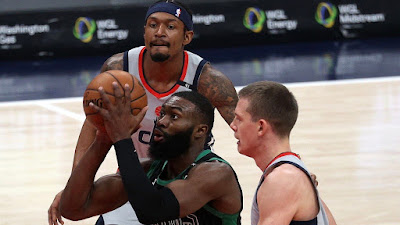 The Celtics once again showed they're not meant to play matinee scheduled tip-offs, as they fell to the Washington Wizards 104-91 Sunday afternoon at Capital One Arena.
It was a vintage performance for All-Star guard Kemba Walker, who shot 9-of-18 from the field and 4-of-7 from behind the arc to finish with a season-high 25 points to go along with seven rebounds.
Jaylen Brown also netted 25 points and grabbed seven rebounds, as the only other to reach double figures in scoring for the Celtics, that have now lost 10 of their last 15 games and now seem to be bottoming out if you ask the veteran guard.

"It could be," Brown said in his post-game interview, when asked if the team has hit rock bottom. "It's up to the mentality of everybody, how we come in every day and prepare to work. If you let it be rock-bottom mentality then that's what it's going to be. You come to play, then it'll show. And today we weren't very good."

Bradley Beal recorded a game-high 35 points on 10-of-18 shooting, 11-of-11 from the free throw line and 4-of-9 from deep for the league's current scoring leader. Russell Westbrook was one rebound (9) shy of a triple-double, as he scored 13 points and dished out 11 assists, while Rui Hachimura added 15 points for the 7-17 Wizards.
Washington led for nearly the entire game and held an opponent below 100 points for the first time all season, even holding Celtics leading scorer Jayson Tatum at 26.6 per-game, to a season-low six points on 3-of-14 from the floor.
Though the Celtics limited the Wizards to 39.8% of made shots and 23.3% on attempts from 3, they trailed by as many as 25 points, while shooting 35.6% from the floor, 25.7% from 3-point land and 18-of-30 from the free throw line.

"Sometimes my 15-year-old asks me when I get home, 'Why isn't Tatum in here? Why isn't Brown in here?' Because they have to sit sometimes. You can't play those guys 48 minutes a game every single night," Coach Brad Stevens said of the pressure to play Brown and Tatum more than he does.

The Celtics (13-13), who were without Marcus Smart for an eighth straight game with a torn right calf, will travel back home to host the Denver Nuggets Tuesday night. Tip-off at TD Garden is scheduled for 7 pm EST.
Game Notes:
The Celtics lost the battle of the boards (63-62) and points in the paint (40-32) to the Wizards. Boston only managed to dish out 14 assists on 32 made baskets, compared to Washington's 24 on 33 made shots.
Joel Pavón
Follow @Joe1_CSP