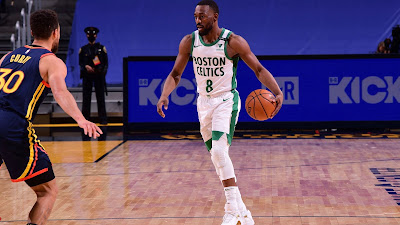 The Celtics backcourt just got thinner, as the team announced that Kemba Walker will be out Wednesday against the Sacramento Kings, on the second night of a back-to-back for what they are calling management of his left knee.
Rookie Payton Prichard was also ruled out while he continues to rehab an MCL sprain in his right knee.

#NEBHInjuryReport for tonight vs. Sacramento:

Walker has yet to play in any back-to-backs since returning to the lineup on January 17 in a blowout loss to the Knicks after missing the first 11 games of the season. Pritchard traveled with the team and was listed day-to-day as of yesterday before being downgraded to out less than 24 hours later.
Boston, who is already without Marcus Smart (calf sprain) for at least the next two weeks, pulled off a 111-107 win over the Golden State Warriors Tuesday night, but will be shorthanded on ball handlers when they take on the Kings tonight.
Veteran Jeff Teague more than likely will start in place of Walker, with the depth chart at point guard consisting of Carsen Edwards and Tremont Waters. Don't be surprised to see Jaylen Brown or Jayson Tatum step up and make plays for others as well, as it wouldn't be the first time this year.
The Celtics (11-8) look to make it 2-0 on their five-game west coast trip, as tip-off against the Kings (9-11) is at 10 pm EST.