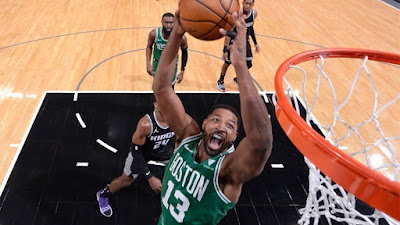 Resting Kemba Walker on the second night of a back-to-back, coach Brad Stevens was forced to go deep into the rotation. Despite Jayson Tatum's near triple-double, the short-handed Celtics couldn't overcome De'Aaron Fox's 26 point, 11 assist-performance on the road in a 116-111 loss to the Sacramento Kings.
Tatum finished with 27 points, nine assists, and 10 assists, while Jaylen Brown scored 21 points. On a night where most of Boston's bench struggled, Tristan Thompson played arguably his best game as a Celtic. Making his presence felt inside, Thompson was strong on the boards and an efficient scoring option, hitting seven of his nine shot attempts -- for a season-high 17 points and 10 rebounds, despite not playing in the fourth quarter only to be subbed in during the final seconds.

"I think things are starting to click. For me, being more aggressive and getting back to being myself," said Thompson during his post-game press conference.

Thompson's strong outing rubbed off well on his teammates, who took notice of his impact that stretches further than his play on the court.

"I thought our guys gave good effort. We struggled to get stops late, but the last two quarters they made a lot of tough plays too. De'Aaron Fox and Haliburton are a handful," said Stevens giving credit to the Kings' play down the stretch.

The Celtics dominated the first quarter behind Tatum's eight points, three rebounds, and three assists. With help from Thompson (6 points) and Brown (9 points), Boston capped off their strong offensive start with a Tatum floater at the buzzer that put them into the second quarter with a 26-22 lead.
Although the Celtics' first quarter was encouraging, their defense let up in the second. Boston started off on a high note with Robert Williams III stuffing Hassan Whiteside at the rim. His strong defensive play fueled the Celtics' 6-0 run to start the period, but shifting to using small-ball lineups, Boston's defense allowed the Kings to jump back into the game.
Outscoring the Celtics 30-25 in the second quarter behind Barnes' 10 points, the Kings stormed back with a 9-0 run that started with only four minutes left before the intermission. After Fox's last second made shot, Sacramento went into the break with a 52-51 lead. Letting up defensively late in the first-half, the Celtics looked like a team with no energy. Even with key injuries and playing on a back-to-back, Brown didn't believe fatigue played a role in the loss.

"I wouldn't say it was a factor. We've been pretty good on back-to-backs all year. Yeah we're short tonight, down in bodies, but it's still a game we could have won," said Brown in his post-game presser.

Following an inefficient half, Brown came out firing, scoring nine points on 4-of- 6 shooting, while Thompson's six points played a vital role in Boston's 22-12 third quarter start. Though Tatum didn't score he became more of a facilitator in the period, taking over point-forward duties and dishing out five assists.
It was a back-and-forth final five minutes where the Kings responded to a Celtics 9-0 run with a 7-0 spurt of their own to take a 100-97 lead and never looked back.
Driving through the double team, Tatum converted an and-one opportunity, cutting the Celtics deficit 112-111. However, Fox's offensive outburst continued making a step-back mid-range shot that gave the Kings another crucial three-point advantage with just under a minute to play.
Boston had a chance to tie with 9.3 seconds remaining out a timeout, but Haliburton fouled Grant Williams on a set play for Brown, which sent him to the line. Intentionally missing the second free-throw after missing the first, Williams grabbed the board and gave Tatum another opportunity on a right corner three, but he failed to convert it with Fox all over him.
Despite the disappointing loss, Stevens has been pleased with Thompson as of late, who has started to find some offensive rhythm after being inconsistent for most of the year.

"I think the last two nights have been his two best games and that's really encouraging. Not just from the scoring standpoint, but just he’s doing a lot of things. He's active on the glass, he's done a good job."

With a 1-1 record on their five-game west road trip, the Celtics (11-9) will welcome back Walker into the lineup and are hopeful Payton Pritchard will be ready to play when they face the Los Angeles Clippers (17-6) Friday night. Boston, likely running with their two-big man lineup, hope Thompson continues his recent offensive success in a tough primetime matchup. Tip-off is at 10 pm EST on ESPN.