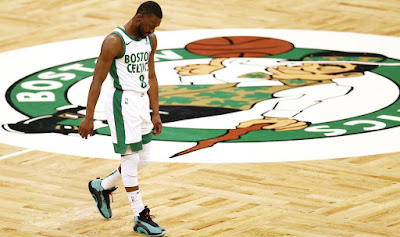 The Celtics found themselves with a golden opportunity Saturday night, when Kemba Walker deflected Anthony Davis' midrange jumper in the final seconds of the team's 96-95 loss to the Lakers.
Jaylen Brown ended up with the ball before it found its way into Walker's hands on the opposite end and he took his patented step back 13-footer, but missed the potential game-winning shot attempt as time expired.

"That's a great look for Kemba in that scramble situation. I loved it," Brad Stevens said of his team's final shot. "Great player got a great look."

For Walker, who finished with only four points on 1-of-12 shooting (0-5 from 3), that last shot was just another example of an up and down return from a stem cell injection in his left knee that forced him to miss the first 11 games of the regular season. While still under a minutes restriction, Walker is averaging 14 points on 37% shooting from the field (29.3% from 3) in only six outings so far.
Though Walkers says he's been pain free, something that he never felt during the second half of last season or throughout the playoffs in the bubble, the Celtics All-Star had one of the worst shooting performances of his career against the Lakers.

"It's more mental than anything, I think. I'm trying my hardest just not to get frustrated. I got frustrated tonight at myself and it kind of put me in a bad place," Walker said of his off shooting night. "And you know I'm not a player like that to really get frustrated. You know, I'm always smiling and I wasn't that tonight. I got into my own head and mentally, I hurt myself."

The Lakers proved that they're one of the league's best defensive teams, as they did a great job not letting Walker get into any kind of offensive rhythm, but the veteran guard did find other ways to contribute by grabbing six rebounds and dishing out four assists in 28 minutes of action. Stevens says he's is not worried about Walker finding his shot again.

"We're riding Kemba. He's a really good player who really cares about his team, really wants to be a part of something special with guys that are going to give for each other," Stevens said. "Sometimes, it's not your night, but more often than not, it is his night and we believe strongly in that."

Walker will look to shoot out of his slump when the Celtics (10-8) head out on their west coast road trip, beginning on Tuesday against the Golden State Warriors.