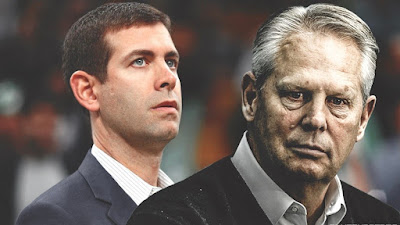 The Celtics are 13-13 and floundering while trying to find consistency on both ends of the floor. But if you ask Danny Ainge who should get criticized for the recent mediocrity of this roster, and he'll point the finger to himself.
Ainge says the responsibility is on him when it comes to the talent he brought in that are not executing and continue to struggle, especially since the last 10 of 16 games have been losses. But if you think coach Brad Stevens should own a slice of the blame pie, the Celtics president of basketball operations simply does not agree with that notion.

"That's not on Brad," said Ainge during an interview with the Boston Herald on Monday. "Brad is the opposite of that. Brad is fearful of every opponent and respects every opponent, and is as humble as there is. That is 100 percent on me, meaning that the players that we have selected to be on the team, and it's on them individually. The last person this is on is the most humble, hard-working person in the entire organization, and that is Brad Stevens."

While Sunday afternoon's loss to the Washington Wizards may have been the final straw for the Celtics players and coaches staff, Ainge's frustration is mounting up not because of the roster's lack of depth, but their lack of simple continuity.

"We had a game this week where we had Semi (Ojeleye) knock down six threes," he said. "We had a different game where Daniel Theis knocked down five threes. I know those guys can make some, but we need to be consistent. I know they're capable of making shots. So some of what I talk about is we need to get better at it, and of course I watch NBA games every night to see who I think could fit in with our team. Most of the players I think could really fit and come in to help our team, typically most teams don't want to give away."

Despite the Celtics' needs to upgrade the current roster, Ainge is no rush to use the team's $28.5 million trade exception. With the NBA trade deadline just over five weeks away on March 25, Ainge still doesn't feel any pressure to put the TPE to use anytime soon. Boston at the moment only has access to $19 million of it — under the hard cap — but more can be used in any possible trade or trades, depending on how much salary also gets moved.

"I don't feel a pressure to use that," he said. "Each and every year I'm looking for opportunities to improve our team. But it's a little more complicated than just using the (trade exception) and all of a sudden our team is going to get better. It's more than that. It's not like the (trade exception) is going to save the day from my perspective.
"Could the TPE help us? Sure. Otherwise we wouldn't do it."

In a challenging season during this COVID-19 global pandemic and the new play-in tournament, that still gives a chance for more teams that may normally be sellers at the trade deadline to instead make a run towards the postseason, while being reluctant to make changes to their rosters.
Though Ainge's is seeking "shooting with size," he believes his roster is still capable of being much more consistent.

"I think that sometimes we can embellish the big picture -- it's my job to look at the big picture, it's my players' and coaches' job to do what they can to prepare to win the next game," Ainge said. "I like the fact that there's high expectations in wearing a Boston Celtics uniform, and I don't want to overreact to a couple of bad games that everyone expected us to win, simply because I respect those players that beat us."

Following back-to-back losses to the Detroit Pistons and Wizards, two bottom dwellers of the Eastern Conference record wise, Ainge recognized that though as disappointing as those outcomes were it's another reminder to never judge a team solely on their current wins and losses.

"There's a lot of parity in the league right now, and those teams you say are not playing well are still good. If you have Russell Westbrook and Bradley Beal on the team, you're a dang good team — you’re still capable of getting crushed if you don't show up to play. And Detroit is a team that has good size and length, and they shot the heck out of the ball that night. That's the NBA.
"I think there's two things. A, we're not playing with as much urgency as we need to on a nightly basis. And B, I think for whatever reason we don't understand how hard we need to play to win. (An opponent) that is not playing good, you don't know how dangerous they can be and we don't have the humility to play and respect our opponents to the extent we need to."