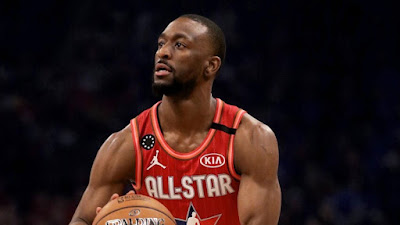 Kemba Walker just had what most would perceive as an All-Star performance Friday night when the Celtics guard hit some clutch shots and free throws down the stretch in the team's 119-115 win over the Los Angeles Clippers at the Staples Center.
While that was only Walker's eighth game since returning from a left knee injury, his 24 points marked a season-high for the four-time All-Star, who more than likely may be not selected to head to this year's NBA mid-season festivities. Still, the Celtics guard had something to say on the topic and even siding with Los Angeles Lakers superstar LeBron James, that the league shouldn't host an All-Star game during the COVID-19 pandemic.

"I'm probably not going to be selected so I could care less," Walker said prior to the Celtics' win over the Clippers on Friday. "We all saw what [LeBron] said

"I agree [with LeBron James]. He's a smart man. He's been around. He's a leader. A lot of things he says are correct. He feels the way he feels. I'm probably going to be on vacation."

The NBA and the National Basketball Players Association reportedly finalized an agreement Thursday, to hold an All-Star Game on March 7 at the State Farm Arena in Atlanta. The 2021 NBA All-Star Game was originally scheduled to be played in Indianapolis this season, but the league postponed having the game in Indiana until 2024 back in December. The NBA All-Star Game would be the first All-Star Game played in any of the four North American major sports leagues since the start of the coronavirus global pandemic.
The agreement also says that players will be allowed to travel anywhere within the United States -- including Hawaii, the U.S. Virgin Island and Puerto Rico -- during the league's mid-season break from March 5-10.
The NBA's reported plans have caused an uproar among the players throughout the league and many have spoken against the possible risks of playing the game. James told reporters Thursday night that he has "Zero energy and zero interest" for an All-Star Game this year.
Sacramento Kings young star guard De'Aaron Fox didn't mince words when telling reporters following his 26-point performance in a 116-111 win over the Celtics on Wednesday, that "it's stupid" to play the game this year.

"If we have to wear a mask and do all of this for a regular game, then what's the point of bringing the All-Star Game back?" Fox said during his Zoom conference with the media.

Though Walker's 15-point season average and his lack of games played might not warrant a fifth All-Star bid, his teammates Jaylen Brown and Jaylen Brown have a great shot to not only make it but possibly head to Atlanta as starters, as they currently sit fourth in the fans first return of votes at their respective positions.