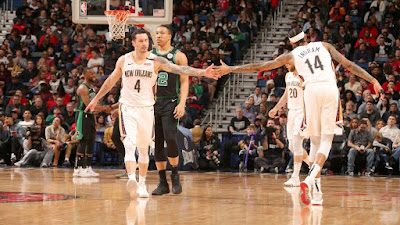 After losing Marcus Smart to a Grade 1 calf strain during Saturday night's loss to the Los Angeles Lakers, the Celtics may seem to be prepared to upgrade their depleted backcourt.
Already rumored to be shopping Lonzo Ball, the New Orleans Pelicans are now looking to find compensation for JJ Reddick, who has become a popular trade target.
According to Shams Charania of The Athletic, Boston has emerged as one of three teams to acquire Reddick's services along with the Brooklyn Nets and Philadelphia 76ers.
The Celtics are already thin in the backcourt without rookie Payton Pritchard, who suffered a right knee sprain that could reportedly keep him out until at least Wednesday.

"Both are doing a little bit more. Payton's a lot closer than Romeo[Langford]. But I don't know what that means," Brad Stevens said to reporters on Friday.

With Langford's return date still up in the air, that leaves Carsen Edwards, Jeff Teague, Tremont Waters, Javonte Green, and rookie Aaron Nesmith as the only remaining guards on the roster.
The 36 year-old sharpshooter's play has declined this season, averaging only 7.6 points per game on 33.3% shooting from the field, and a career-low 29.8% from deep. Although his production has declined significantly this season, Reddick has struggled to find a role in a crowded Pelicans backcourt so far this year.
The Celtics could certainly use his shooting off the bench, as Boston is ranked 20th in the NBA in three-point shots made, and 23rd in bench scoring at only 33.6 points per game. As a career 41.4% three-point shooter and only one year removed from averaging 15.3 points per game on 45% shooting from behind the arc, Reddick could be just what coach Stevens needs to provide scoring off his bench.
With Reddick's $13.1 million expiring contract, the Celtics would need to either match salary with a combination of players that could include Tristian Thompson ($9.2 million), Grant Williams ($2.5 million), and Semi Ojeleye ($1.7 million), or could elect to use up some of their $28.5 million trade exception to pair with future picks. Boston currently owns their own first-round picks over the next two seasons, including four total second-rounders over the next two years, which would likely be on the table in any future deal.
The Pelicans will likely wait for the best offer between the Eastern Conference contenders, but the Celtics certainly have the assets to package in a potential trade. With hopes of upgrading their shooting and bench, don't be surprised to see Danny Ainge pull the trigger on a deal for Reddick, who despite his age still holds plenty of value.