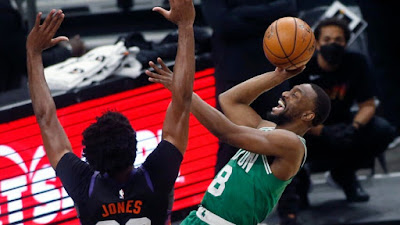 The Celtics played their traditional Super Bowl matinee game, but fell short to the Phoenix Suns in a 100-91 loss Sunday afternoon.
All-Star Jayson Tatum struggled from the field, going 8-of-22 for 23 points, while Kemba Walker shot 4-of-20 to finish with 14 as Boston's top-two scorers.

"Tonight wasn't our night shooting the ball," Celtics coach Brad Stevens said. "I told the team just now that I am more encouraged than discouraged because you are going to have days like this. That could have been easily worse the way we shot the ball.'"

Daniel Theis and rookie Payton Pritchard combined for 8-of-17 shooting (6-of-11 from 3) to chip in 12 points apiece off the bench as one of the few bright spots for the Celtics, who are now 12-9 on the season.
Boston was playing without Jaylen Brown (knee soreness) for the second straight game and Marcus Smart missed his fourth with a calf tear.
Mikal Bridges finished with 19 points and nine rebounds to led the Suns, who were playing in front of their home fans for the first time this season. Devin Booker had 18 points, 11 assists to go with seven boards, while Cameron Johnson added 17 and DeAndre Ayton registered a double-double of 16 points, 11 rebounds. Phoenix improved to 13-9 and have won five of their last six games.
The Suns led by as many as 17-points midway through the third quarter, before the Celtics cut the deficit 76-68 heading into the final frame. Walker hit one of his four 3-pointers of the afternoon to pull Boston within 91-86 with 2:30 left to play.
Pritchard added a deep 3 with 1:04 remaining and the Celtics were down 94-91, the closet they would get the rest of the way. Booker responded with a 15-foot jumper and the Suns held on for the win.
Boston trailed 27-19 after the first period and shot 7-of-26 (27%) from the floor and were behind 52-49 at intermission. It didn't get much better in the second half, as the Celtics shot 35.5% for the game.

"We've got to make it easier for guys and Kemba to get some easy ones instead of relying on jump shots," Theis said during his post-game presser.

The Celtics, 2-2 on a current west coast swing, will play the finale of their road trip Tuesday night against the Utah Jazz. Tip-off is at 10 pm EST.
Game Notes:
The Celtics, who shot 17-44 from behind the arc, are 25-13 all-time on Super Bowl Sunday. Phoenix outscored Boston 46-26 in the paint and hit 48.8% from the field.
Joel Pavón
Follow @Joe1_CSP