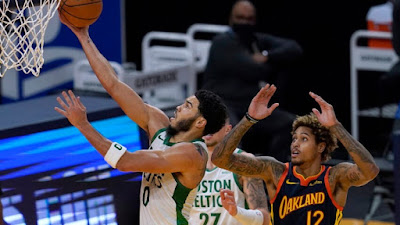 The Celtics came into the Chase Center in San Francisco having dropped five of their last seven games. Jayson Tatum went toe-to-toe with former league MVP Stephen Curry to hold off the Golden State Warriors 111-107 on Tuesday night.
The All-Star forward scored 27 points on 9-of-19 shooting from the field and 4-of-10 from 3, as Tatum also grabbed nine rebounds to secure the win and snap Boston's two-game skid.
Curry lead the Warriors with 38 points, including seven 3-pointers, 11 rebounds and eight assists, but it was not enough as the Celtics are now 11-8 on the season and 1-0 on their five-game road trip.
Jaylen Brown notched a double-double of 18 points, 10 rebounds, while Kemba Walker had 19 points and Grant Williams chipped in 15 points on a perfect 4-4 from the floor (3-3 from 3) off the bench for Boston and without Marcus Smart (calf sprain) in the lineup.
The Celtics went on a 10-0 run to break a 96-96 tie on a ferrous one-handed slam by Brown, who was back in the Bay Area where he played college ball for California in Berkley. With 4:00 left to play, Boston had a 106-96 lead before Curry's 3-point play cut the lead to seven with 3:17 remaining.
Golden State would outscore the Celtics 11-5 the rest of the way and got within three with a minute to go on a Andrew Wiggins (15 points) layup. That would be as close as they would get after Tatum sank a pair of free-throws and Curry missed a 3 on the next possession.

The Warriors, now 11-10 on the season, had to rely on players like Juan Toscano-Anderson (16 points) and Kent Bazemore (10 points) to fill in for the injured rookie James Wiseman (wrist) and starting center Kevon Looney, who sprained his left ankle in the first half and did not return.
Boston outscored the Warriors 28-17 in the second quarter and it was all knotted up 52-52 at intermission. Curry's 3 with 1:03 left in the third got Golden State within one and the Celtics took a 86-85 advantage into the final frame.
The Celtics won the battle of the boards by out-rebounding the Warriors 62-42, which also included 12 offensive rebounds on the night.
Next up for Boston on their west coast swing is the Sacramento Kings (9-11) on a second night of a back-to-back. Tip-off is scheduled for  Wednesday night at 10 pm EST.
Game Notes:
The Celtics shot 46.4% overall and 38.2% from behind the arc, while Golden State hit 45.8% of their shot and 40.5% from 3. Rookie guard Payton Pritchard missed his fifth straight game for Boston with a sprain knee, but could be available Wednesday night against the Kings.