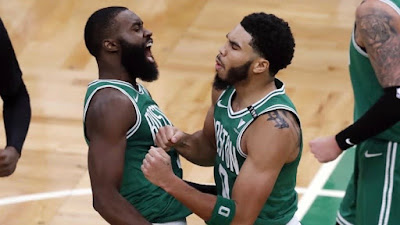 The Celtics at 15-14 are treading water these days following a 121-109 win over the Atlanta Hawks Friday night at TD Garden.
With rising young stars Jayson Tatum and Jaylen Brown being the main reason the team hasn't completely floundered in a much improved Eastern Conference, despite injuries, COVID-19 health and safety protocols, postponed games and disappointing losses to teams with below .500 records -- it hasn't been the season most expected.
While Tatum and Brown lead the Celtics in points respectively at just under 26 per-contest and have even have led the team in assist on some nights, realistically how far can the C's go with two youngsters as your only leaders?
Basketball insider Jeff Goodman on his podcast with Boston sportswriter Bob Ryan, recently shared an interesting quote with guest Jay King of The Athletic, from an anonymous NBA player that just faced the Celtics days prior and offered a hot take on how to defend Boston with Tatum and Brown being the focal point.

"Tatum and Brown can't be your superstars; they only do things that help their game," the player told Goodman. "They don't get anyone else easy shots, all they know how to do is score, Kemba (Walker) doesn't help their center; they don't help anyone, either. They don't turn down tough shots to get another guy an easy shot so teams are onto them.

"Load up on those two (Tatum, Brown) and live with them taking long 2's."

Brown, who is enjoying a career year at 25.6 points on 50.6% shooting, 3.6 assists and 1.2 steals per-game to go along with 5.6 rebounds, has the job to usually guard the opposing team's best scorer -- something that has him as one of the league's best two-way players.
Tatum is also putting up career numbers in points at 25.8 and 4.8 assists per-game this year, including averaging 6.6 dimes in the last six outings -- which the Celtics are 3-3 in that span.
It is not that far fetched to say the young duo doesn't necessarily make their teammates better and that hasn’t always translated into victories 29 games in.
However, with coach Brad Stevens experimenting with over a dozen starting lineups thus far due to a variety of reasons, only time will tell if the roster can muster up some consistency or some moves need to be made sooner rather than later.
Joel Pavón
Follow @Joe1_CSP