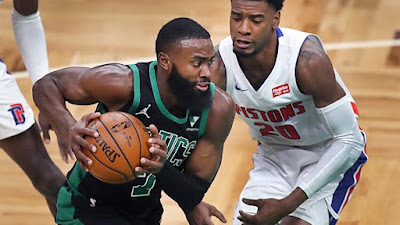 The Celtics couldn't pull off a late rally, as they fell 108-102 to the Detroit Pistons Friday night at TD Garden.
Saddiq Bey went 10-of-12 from the field, including a perfect 7-of-7 from deep to finish with 30 points and 12 rebounds to lead Detroit to just their seventh win of the season.
It was a career-night for the No. 19 overall pick out of Villanova in points, 3's and rebounds, as Bey hit his seventh dagger from beyond the arc to put the Pistons ahead comfortably by six with 39 seconds left to play.
Detroit at 7-19, have now beaten the Celtics (13-12) twice this season and also own wins over the Lakers, Nets, 76ers and Suns, who are all above .500 teams.

"We are so inconsistent," Celtics coach Brad Stevens said. "There is a big difference between being capable and consistent in this league, and we aren't there yet."

Jayson Tatum scored a game-high 33 points, grabbed 11 rebounds and led the Celtics with a team-high seven assists. Jaylen Brown netted 27 points and Daniel Theis added 11 points and nine rebounds.
Delon Wright scored 22 points, Jerami Grant added 15 and Josh Jackson chipped in 14 points for the Pistons
Boston jumped out to 12-2 lead to open up the first before the Pistons went on a 11-0 run to go ahead 27-23 to end the quarter and never trailed the rest of the night.
The Celtics used a 13-2 run to conclude the first half and were down 54-52 at intermission. Detroit led by 13 at the start of the fourth quarter and Boston cut it down to 95-93 with less than two minutes to play. Following a Jackson 3, a Tatum layup and the C's down 98-95, Bey hit his final 3 of the game to become the first rookie in NBA history to net seven 3-pointers without a single miss.

"We've got good basketball players, but we just have to make better plays," said Jaylen Brown during his post-game presser.

Boston went 1-1 on their mini home-stand and played without Kemba Walker (rest) on a second night of a back-to-back. They'll head to the nation's capital to face the Washington Wizards (6-17) on Sunday afternoon, as tip-off is at 1 pm EST on NBATV.
Game Notes:
The Celtics shot 43.9% from the floor and 29.6% from 3, while the Pistons hit 43% of their attempts and 39.5% from behind the arc. Boston out-rebounded Detroit 55-49, but lost the battle of the assists 25-15 after finishing with 30 dimes against the Raptors Thursday night.
Semi Ojeleye left the game midway through the third quarter after colliding with Blake Griffin on a drive to the hoop. He limped off the court to the Celtics bench before retreating to the locker room and did not return due to to what team officials called a sore knee. The forward tallied nine points, five rebounds and three assists in 23 minutes as a starter for the second straight night.