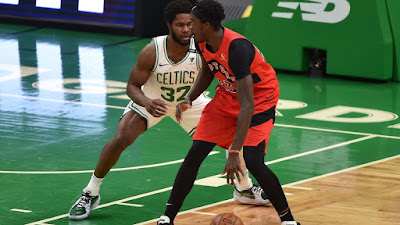 The Celtics bounced back from a 2-3 west coast road trip to beat the Toronto Raptors 120-106 at TD Garden Thursday night.
Semi Ojeleye didn't waste the opportunity as a starter, scoring a career-high 24 points on 8-of-12 shooting, including 6-of-8 from deep to lead the Celtics and snap a two-game skid.

"I really try to focus on the process, on the shooting and not the result," Ojeleye said to reporters post-game.

Kemba Walker netted 21 points while hitting 5-of-8 from behind the arc and rookie Payton Pritchard scored 20 points to go along with a career-high six 3's. But it was the playmaking of Jayson Tatum (17 points) and Jaylen Brown (12 points) that made the difference on offense, as they both combined for 19 assists.

"(They're) able to impact the game whether they're scoring or not," Ojeleye said. "They took everybody with them."

The Raptors came in winning four of their last six, as they were led by Kyle Lowry who also tied a game-high with 24 points on 10-of-15 from the floor. Pascal Siakam had 23 points and Norman Powell added 15 points for Toronto (12-14).
The Celtics hit a season-high 20 3-pointers to never trail and lead by as many as 19 points before the Raptors cut the deficit 98-93 with 6:21 left in the fourth quarter. Boston used a 15-5 run to put Toronto away and both teams emptied their bench by the two-minute mark.
Despite the Raptors playing without OG Anunoby (calf strain) for the ninth straight game, they outscored the Celtics in the paint 58-32.
Boston was also playing without their leading assists man in Marcus Smart (calf tear) for the sixth consecutive game, but the team finished with 30 assists on 39 made baskets.

"If we can play this way and we can just continue to share and build some habits, I think that will help us," coach Brad Stevens said.

The Celtics at 13-11 on the season, will host the Detroit Pistons (6-19) Friday night on a second night of a back-to-back. Tip-off is at 8 pm EST.
Game Notes:
The Celtics shot 45.3% from the field and 51.3% from 3, while the Raptors hit 49.4% of their attempts from the floor and 32.1% from behind the arc. Boston outrebounded Toronto 62-37, which included 14 offensive boards and didn't allow any second chance points on the other end.
Ojeleye and Pritchard become the first Celtics duo to finish a game hitting six 3-pointers each in franchise history.