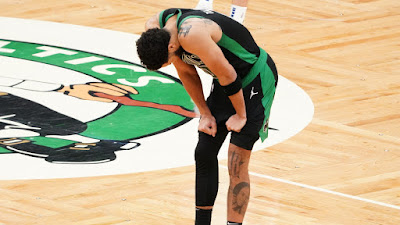 It's not common to see a local TV play-by-play announcer get angry at the team they work for, but then again there aren't many like Mike Gorman, who's been the voice of the Celtics for 40-plus years.
On Wednesday morning Gorman took to the radio airwaves to express some harsh words about the Celtics following their 110-107 road loss to the Dallas Mavericks.
Gorman is not just frustrated but says "I am angry as hell" with the team, but in particular he's not pleased with the All-Star duo of Jaylen Brown and Jayson Tatum, who were named Eastern Conference reserves prior to Tuesday night's loss.

"I couldn't be happier for Jayson (Tatum) and Jaylen (Brown), said Gorman on 98.5 The Sports Hub's Toucher and Rich. "I hope they make co-MVPs of the game. The All-Star Game is a perfect showcase for those guys because they have an abundance of individual skills and that's what the All-Star Game is all about — individuals going 1-on-1 and we know about going 1-on-1."

It's hard to pick up the hints of sarcasm in Gorman's comments via text but he was basically calling out the Celtics dynamic duo for their individual play this season versus showing team leadership.

"Unfortunately, the last time I looked; basketball is a team game. It's not tennis; it's a team game," Gorman said. "We are just playing like we just met on the bus on the way over; it's really sad to watch these guys right now. In the last three weeks, the Celtics have lost to Sacramento by five, Detroit by six, Washington by 13, Atlanta by eight, New Orleans by five; every one of these teams had one thing in common; they're all under .500. These teams feast on records like that. Instead, the Celtics were the ones getting feasted."

While the Celtics have beaten playoff teams like the Bucks, Clippers, Raptors and Nuggets, they find themselves below .500 at 15-16 for the first time since the third game of the season and Gorman is putting blame on the shoulders of rising stars Brown and Tatum.

"Am I saying that Tatum and Brown are responsible for the Celtics' current record? Yes, I am," Gorman said. "I really believe that to be the case. The best player on the team, you also get the glory, you also get the gas. You also have to lead by example, which is; you expect your teammates to be unselfish? You have to be unselfish. If you expect your teammates to play hard, you have to play hard. All the time.
"It's terrific that you can get 27 (points) a night but how about 22 (points) and the C’s win the game?"

Gorman clearly can't wait for the All-Star break to be done and over with so that the Celtics can possibly get back on track. That would mean that Brown and Tatum have to find away to pull together and start looking at the bigger picture for the second half of the season for the greater good of the team.

"We need these two guys to come back from the All-Star break and stop thinking in individual terms, stop thinking about the numbers that they're getting, and start looking at the wins and the losses," Gorman said. "Start looking at how many assists you pile up in the game. Celtics should have between 25-30. Instead, the number is usually around 15-16. This team just needs to be more unselfish and I think they start at the top. And the top right now is Jayson Tatum and Jaylen Brown, and they need to respond.
"They can go have their weekend in Atlanta, they can go play that game but when they come back to business here in Boston; they can start thinking about winning games and not getting numbers."

The Celtics are currently on a two-game skid and have dropped seven of their last 10. They'll conclude their mini road trip against the Atlanta Hawks Wednesday night -- which will be the third meeting between the two teams in eight days.
Joel Pavón
Follow @Joe1_CSP