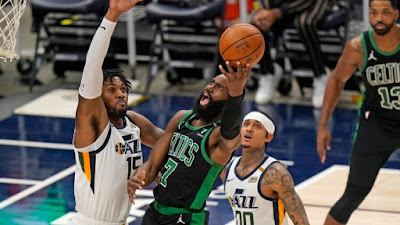 The Celtics were looking to close out their west coast road trip on a positive note Tuesday night, but the league leading Utah Jazz had other plans, as they beat Boston 122-108 for their 20th win of the season.
Jaylen Brown made his return after missing the previous two games with left knee soreness and finished with 33 points on 12-of-22 shooting and eight rebounds, but it wasn't enough for the Celtics (12-11) to hold off the Jazz at the Vivint Arena.

"They got the best record in the league and it showed," Brown said in his post-game presser. "The way they play with the freedom. The kind of the flow they have to their team is really good right now."

Jayson Tatum struggled offensively, hitting 7-of-20 from the floor netting 23 points and Daniel Theis went 5-of-6 (career-high) from behind the arc for 15 points -- before fouling out in the final six minutes. They were the only other two outside of Brown to reach double-digits in scoring for the Celtics, who have lost three out their last four.
Donavan Mitchell's 36 points (6-11 from 3) and nine assists were a game-high, while Joe Ingles scored 24 and Rudy Gobert recorded a double-double of 18 points, 12 rebounds for the Jazz (20-5) that have won 16 of its last 17.
The Celtics trailed by as many as 14 in a disastrous third quarter, but cut the deficit 108-104 with 3:10 remaining in the fourth before the Jazz scored on six straight possessions and shut the door on any potential rally with a 14-4 run with less than 30 seconds left to play.
It looked like it as going to be one of those shooting nights for Boston after connecting on 7-of-13 from deep in the first quarter, including three straight for Brown to open up the game and take a 27-19 lead.
Utah held the Celtics scoreless for a four minute stretch early in second period and used a 14-4 spurt to take a 44-38 advantage. Boston closed the half outscoring the Jazz 9-4 and were trailing by only one at the break.
But Mitchell scored 14 of Jazz's 42 total points in the third and used a 17-4 run midway through the period to take a 90-79 lead into the final frame.

"You can't make mistakes against these guys," Celtics coach Brad Stevens said. "They're exceptionally well oiled on offense, just a special team to compete against. When you make a mistake, they make you pay."

Boston went 2-3 on their five-game western swing and are now 4-8 since their 8-3 start to the regular season. They'll return home to host the Toronto Raptors at TD Garden Thursday night.
Game Notes:
Celtics shot 44.2% from the floor and 44.8% from behind the arc, while the Jazz hit 47.6% of their shots and 37.5% from 3-point territory. Utah outrebounded Boston 56-43 and assisted 28 times on 40 made baskets to the Celtics 18 assists on 38 made shots. The C's also outscored the home team 46-38 in the paint.