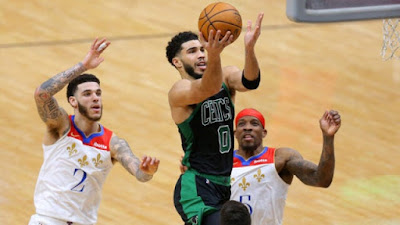 The Celtics continue to come up with interesting ways to lose games, especially ones that tip-off early on Sunday afternoons. Such was the case in New Orleans, as they blew a 24-point lead in their 120-115 overtime loss at the Smoothie King Center.
Jayson Tatum finished with 32 points on 10-of-24 shooting and nine rebounds, while Jaylen Brown scored 25 and dished out nine assists for Boston, who are now 15-15 on the season.

"We kind of got away from what got us the lead, not moving the ball, guarding, and they stormed back," Brown said postgame of the fourth quarter collapse. "This one definitely hurts. It's tough. Just a tough loss — a game we 100 percent should have won."

Kemba Walker went 5-of-21 from the floor, including 1-of-12 from deep to score 14 points, after having his best performance of the season Friday night against the Atlanta Hawks.
Tristan Thompson also added 14 points, nine rebounds and rookie Aaron Nesmith chipped in 10 points off the bench, as his minutes have increased as of late.
Brandon Ingram scored a game-high 33 points and Zion Williamson netted 24 of his 28 points in the second half, to go along with 10 rebounds. Josh Hart added 17 points, 10 rebounds off the bench and Lonzo Ball chipped in 16 for the Pelicans (13-17) who had loss five of their last six.
Boston led 79-55 midway through the third quarter, before New Orleans went on a 19-8 run to end the  period. The Pelicans then used a 10-2 run to start the fourth, including eight unanswered from Hart.
Ingram on a transition 3, tied the ball game 98-98 with 4:10 left to play in regulation. The lead changed twice in the final 11 seconds of the fourth, as Tatum hit a jumper to make it 106-105 and Williamson responded with a layup while being fouled to put the Pelicans ahead 108-106 with 6.9 seconds remaining. Tatum once again came up big, hitting a running floater to force overtime, leaving 0.2 on the clock.

"If we want to be a really good team, we've got to put teams away early, especially being up 20-some points," said Tatum during his post-game presser.

New Orleans pulled ahead for good after another Ingram 3-pointer broke a 112-112 tie and Tatum only managed to score two points in the extra five minutes.
It was a tale of a two halves, as Boston shot 39.8% for the game after hitting 46% of their shots from the field in the first 24 minutes, while taking a 63-47 lead into the break. New Orleans would outscore the Celtics 73-52 in the second half and overtime to pull out the comeback victory.

"We played exceptionally well for a large part of the time," said Brown who struggled from the floor shooting 7-of-23. "We just got to mature and grow up."

The Celtics head to Dallas to take on the Mavericks Tuesday night, TNT will have the broadcast at 7:30 pm EST.
Joel Pavón
Follow @Joe1_CSP