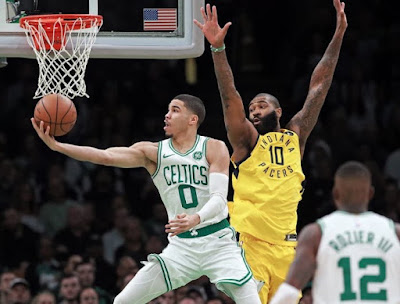 The Celtics' offense has come a long way from what it was at the start of the regular season.

For the first time this year, Brad Stevens is seeing his offense produce at a consistent high level without relying on Kyrie Irving's ability to put the team on his back. Suddenly, those days are a thing of the past while the Celtics have managed to string together four consecutive wins -- with and without Irving in the fold -- by relying on each other along with the notion that Brad Stevens' system will exude positive results.

The numbers were as staggering Wednesday night as we've seen all season. Celtics crushed the Eastern Conference's third place Pacers by the tune of 135-108, a new season-high in points scored, including 73 points off the bench, while they shot 56.8 percent from the floor.

If you ask Irving, it's difficult to pinpoint the exact 'turning point,' according to him there's been several throughout the season, but the one that sticks out to him the most would be December 21, following a 120-107 loss against the Bucks. The players only meeting that took place in the Celtics locker room was an open forum for his team, it was a moment that needed to happen in order for Boston to move towards the right direction.


"We just had to build that chemistry first," Irving explained. "Getting to know one another, (we) really put everything out there and kind of moved on from that point. At that point, playing against Milwaukee, we were not at rock bottom but we needed to addresses some (expletive) so it was just good to get stuff out in the air.

The Celtics are 7-2 since their loss against the Bucks. Boston's offense is averaging 119.8 points throughout that stretch and continues to be one of the hottest teams in the NBA.

For the second straight game, at least seven Celtics players scored in double figures, as Marcus Morris and Jaylen Brown each lead the way with a game-high 22 points, while Jayson Tatum added 20 points. Irving netted a dozen alongside the play of Terry Rozier and Daniel Theis off the bench.

The ball movement led to 32 assists as the Celtics have now finished with at least 30 in each of its last five games -- a new season record.

For the Pacers (27-14), winners of three straight against the Celtics and playing on a second night of a back-to-back, there was not much of any offensive rhythm. Domantas Sabonis led Indiana with 20 points, 7 rebounds and 5 assists, while All-Star Victor Oladipo finished with 17 points and Tyreke Evans added 15 points and 5 assists off the bench.

The flow of Boston's offense has opened up opportunities for guys to knock down open looks and finish at the rim -- where the Celtics scored 56 points. This isn't the same Celtics team the Pacers, one of the league's better defensive teams, faced back on November 3.


"It was hard to find good clips at the start of the year and I think some of that was because we were pressing," Stevens said after the game. "Some of that was because we missed shots when the ball was moving. All looks a little bit better when it finishes with a make but that's who we have to be. I mean, there's going to be plenty of moments where we're going to be bottled up and somebody's going to have to go and do what they do in an individual way.

"And you know, obviously we've got a couple of guys, especially Kyrie (Irving) and Jayson (Tatum) and guys like that that can go and do that but I think that they draw so much attention and everybody else benefits so much from the attention that they draw, that's when the ball's popping; it's a lot -- it's hard to guard."

The Celtics, who have won five of their last six games, are hitting the road on the second night of a back-to-back and it should be an accurate measuring stick for Stevens to gauge his team's toughness as they head to Miami on Thursday for the start of a quick three-game road trip.

Celtics hit 27-of-40 from the field throughout the second and third quarter. Boston topped their previous season-high of 133 points against the Bulls back on Dec. 6