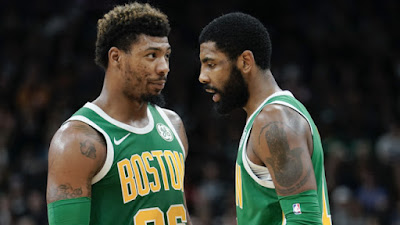 BROOKLYN – The Celtics will be thin in their back court when they take on the Nets Monday night at the Barclays Center.

Coming off back-to-back losses in Miami and Orlando, Boston will look to grab its first and last win of its three-game road trip and will have to do it without Kyrie Irving (right quad) and Marcus Smart (illness). Irving, who said he suffered a right quad injury against the Magic Saturday night, is hopeful he will only miss one game and plans to return to the lineup Wednesday night when the Celtics take on the Raptors at home.


"(It) happened in Orlando," Irving said. "On a continuation after a play, I went up with Aaron Gordon, came down kind of awkward on my knee and I'm just glad I do enough work on my leg, honestly. It could have been bad.

"It's just a tight ass knot in my right quad," Irving smiled. "I'm probably going to need some dry needling a little bit to kind of get that spot out. Other than that I'll sit this one out and play against the Raptors."

With Smart feeling under the weather, Brad Stevens will tweak a starting lineup that rarely doesn't feature Irving or Smart. Monday night will be the first game Smart has missed all season against a Nets team that has won six of their last ten games.

With Irving and Smart both sidelined, Brooklyn will have a good shot at avenging last week's loss at TD Garden.


#Celtics guard Kyrie Irving on facing the #Nets and how he suffered a right quad injury in Orlando pic.twitter.com/0xApJFk2ny
— Josue Pavón (@Joe_Sway) January 14, 2019