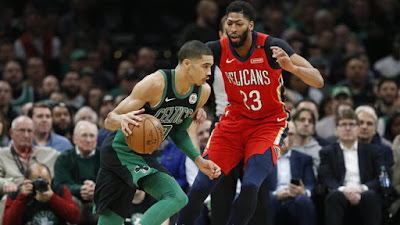 Jayson Tatum is doing his best to not get caught up in the rumors surrounding the Celtics and Pelicans All-Star Anthony Davis.

Although the Celtics aren't interested in acquiring Davis before the NBA's trade deadline on February 7, expect Boston to make an offer over the summer if the superstar big man isn't dealt within the next week. Tatum, who is considered to be one of the league's most promising rising stars, could be the centerpiece of a packaged deal for Davis.

Tatum was asked about how he's handled the speculation of a potential move down the road, a trade that would ultimately be out of his hands.

Is it flattering to be mentioned in a trade for one of the league's best players?


"I mean, it's good to be wanted," Tatum explained. "I guess you can say that but I don't have any control."

Tatum was asked if he's had a chance to talk to Irving about it.


"No, not yet," Tatum chuckled. "But he's probably going to let me do whatever I want."