Kyrie Irving hopes All-Star Game will be competitive: 'It's a waste of my time' 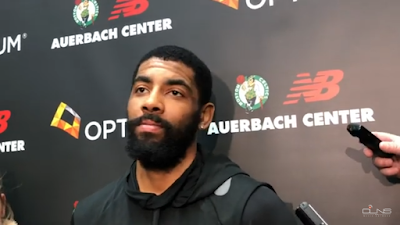 Kyrie Irving will be playing in his sixth All-Star game this year.

He was named one of the NBA's starters Thursday night. Irving will represent the Eastern Conference in Atlanta on February 17 along with Bucks forward Giannis Antetokounmpo, Sixers big man Joel Embiid, Raptors wing Kawhi Leonard and Hornets guard Kemba Walker.

Following Friday's practice, Celtics head coach Brad Stevens was asked about his thoughts on Irving's All-Star nod and if he thought this season has been the best of Irving's career. Stevens was reluctant to call this year -- up to this point -- Irving's best, it's unfair to say so, said the Celtics head coach but did commend his starting point guard for his consistency and legacy as a 26-year-old veteran.


"Six All-Star games by the time you're 26 is a joke," Stevens said. "It's pretty special. You know, it's not easy for these guys -- and we talk about this all the time -- to put on that cape every day. (When) you're that consistent and that good for that long, that takes a lot of effort, takes a lot of focus. Hats off to him."

Irving is thankful for the selection and is excited to put on a show in Charlotte.


"I'm appreciative, grateful for the opportunity to represent the Boston Celtics, represent the NBA," Irving said. "It's televised all around the world, great opportunity for the best of the best for this season to go out and perform for the fans."

While Irving is very much looking forward to the opportunity, he also hopes it will be a competitive game. For years the NBA All-Star Game has been criticized for its lack of defense and excitement due to the overwhelming offense by both teams; something Irving hopes isn't a waste of his time.


"It's a great accomplishment but going out there it's about competing, having fun," Irving explained. "I'm not a fan of the 198 to 198 games, it's a waste of my time but hopefully we can get some competition where guys go at one another."

The 2019 All-Star Game will mark the second year of its new format where the leading vote-getter of both conferences will serve as captains and respectively pick the remaining All-Stars to form their rosters. LeBron James and Antetokounmpo have been elected as captains and will form their teams on February 7, one week following the announcement of the All-Star reserves.

When Irving was asked if he liked the new format, he replied that he didn't care about the change and is more concerned about the game's competitive nature. Warriors All-Stars Steph Curry and Kevin Durant were also named starters along with James, Rockets guard James Harden and Thunder forward Paul George.