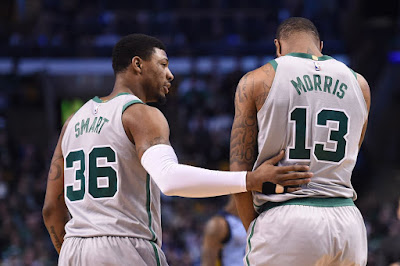 Celtics coach Brad Stevens believes Marcus Smart is not getting talked about enough when it comes to the Marcus Morris and Jaylen Brown dust up on the Boston bench during Thursday night's loss in Miami.


Brad Stevens said that Marcus Smart breaking up the Brown-Morris flare up was more noteworthy than anything. 😂😂😂 pic.twitter.com/GmAsv5IT6j
— Chris Forsberg (@ChrisForsberg_) January 12, 2019

"I looked at it as, everyone else was watching Marcus Morris and Jaylen, how about [Marcus] Smart breaking it up?" said Stevens. "Talk about growth, holy smokes, I thought he'd be in the middle of one of those. That was pretty good. You guys all looked at it as a negative, I could not believe what I was seeing."

Stevens downplayed the minor altercation between Morris and Brown, which was captured by a fan on video near the Celtics bench, before the Bleacher Report got a hold of it, as it spread all over social media. Smart got in between his two teammates before the incident escalated any further during a timeout in the second quarter after Morris shoved Brown while visibly frustrated with Brown, who didn't get back on defense quick enough prior to the stoppage.


"I think when you're part of a team for 82 games, it's not that big of a deal," said Stevens. "I mean, been through a lot of different teams, some of which have taken time to become a team, some of which have been a team from Day 1, and they've all had moments like that at one time or another whether the cameras were on or not."

Marcus Morris: "I feel as though I'm one of the leaders on this team so if I have an engagement with any of my teammates, we all know that it's basketball related and it goes nothing past the court. Just two guys that both care about the game and that's all it was." pic.twitter.com/gDOeXkJYO4
— Chris Forsberg (@ChrisForsberg_) January 12, 2019


"I feel as though I'm one of the leaders on this team so if I have an engagement with any of my teammates," said Morris. "We all know that it's basketball related and it goes nothing past the court. Just two guys that both care about the game and that's all it was."


Brown, however didn't have much to say about the video that went viral, other than it was "nothing major. Let it go. Move on."

Smart, the longest-tenured Celtic has had his fair share of moments on the bench, including getting sent to the locker room after getting into a heated argument with an assistant coach during a loss in Washington back in 2017. It's been clear through 41 games this season that Smart has adopted a leadership role that clearly has been noticed on and off the court.


Photo used is courtesy of Getty Images
Posted by Joel Pavón at 5:46 PM