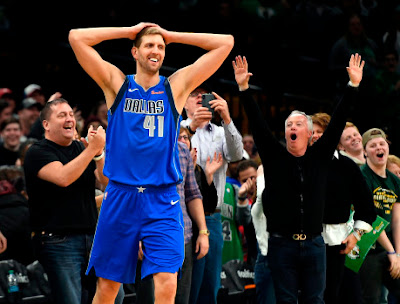 The iconic 7-foot shooter received a standing ovation when he checked into the game in the first half, something you almost never see for an opposing player in Boston and every time Nowitzki pulled up for jump shot he was showered with cheers. Unfortunately, fans didn't get to see the German big man drain a field goal -- he finished 0-for-10 from the floor -- however, the sentiment from Celtics fans Friday night is something Nowitzki will never forget.


"It's sweet when not only your home fans, but fans on the road appreciate what you have done in the last two decades," Nowitzki said. "I appreciate the fans of Boston and unfortunately, I was really disappointed I couldn't even make one. I had some great looks in the first half, trailed three, second half (there was) a couple in the corner. It's just really disappointing."

Nowitzki wasn't the only one who was disappointed.


"I've rooted for the opponent to score two times in my life: Paul Pierce and Dirk Nowitzki," said Celtics head coach Brad Stevens. "That was like, I was sitting over there just like everyone else in the building saying, 'Go in. Go in,' right? But what a special player, you know, kudos to him."


"Man, I wanted him to make a shot. Jesus Christ," Brown laughed. "I got to spend some time with him in South Africa in Johannesburg and just as he's a great basketball player, he's a great person. He's just super cool, low key and humble. He's always joking around. When he finally steps away from this game, he gave so much to it, he's going to be truly honored. So it's just super cool to be in his presence and just watch him out there. He's a true legend."


"It was just one of those nights," Nowitzki said. "I've been shooting the ball really well coming in but just really disappointing now. I definitely will never forget the reception and at the end how they wanted me to break the record, so I appreciate it."