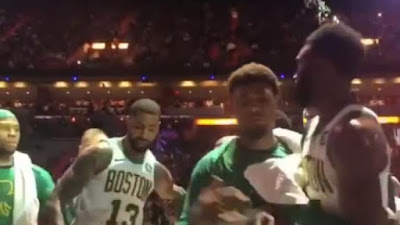 MIAMI – Before the Heat pulled ahead by 26 points in the second half of their 115-99 win over Boston, tempers flared on the Celtics bench during the first timeout of the second quarter.

Miami was in the beginning stages of reaching its largest lead of the night when Celtics forward Marcus Morris and guard Jaylen Brown got into each other's faces and needed to be separated by their teammates. The two appear to share words before Morris gets into Brown's face, Marcus Smart gets in between right as Morris pushes Brown away and teammates step in between to keep Morris and Brown apart.

The video, which surfaced via Bleacher Report, was posted minutes after the media exited the Celtics locker room, following a scrum with Kyrie Irving, who was the final Celtics player who spoke. Due to the timing of Bleacher Report's tweet, Brad Stevens nor any member of the Celtics was asked about the brief altercation.


Jaylen Brown and Marcus Morris had to get separated during a timeout...