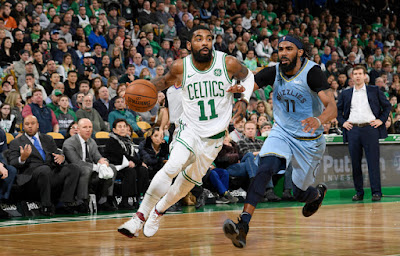 It's time for Kyrie Irving to let his game do all the talking.

After a tumultuous week that was jam-packed with ugly losses, blame games and stunning revelations, the Celtics have refocused themselves to winning basketball games.

We've seen the good, the bad and the ugly this week and it all started and ended with Irving.

Ever since he scolded his teammates, apologized and then revealed parts of a recent conversation with LeBron James -- which took place after the Celtics' loss against the Magic -- Irving's been on a tear. Sure, it's a small sample size -- one that consists of 65 points, 29 assists and 12 rebounds in the past two games -- still, it's translating into wins while the team's veteran players are following his lead.

For the second straight game, Al Horford netted 18 points while Irving's 38 points and 11 assists led the way and Marcus Smart found his outside touch early and often on his way to 20 points on 6-of-8 from behind the arc. The offense has been tremendous since Irving's conversation with James as they topped the Grizzlies, 122-116.

The Celtics shot at a plus-50 percent clip in both contests against the Raptors and Grizzlies and it left Irving damn near speechless throughout what was a rare two-and-a-half post game media scrum. The rant-loving, one-question-at-a-time answering Irving let his performance do the speaking for him Friday night while his play has been contagious among the team's veterans.

Expect the youngsters to organically follow suit. With little-to-no pressure, guys like Jayson Tatum and Jaylen Brown will respond to seeing their vets play at such a high level.

"It starts from the top to the bottom, not the bottom," Brown told reporters following the Celtics' loss against the Nets -- which completed a trifecta of road losses -- and was a statement Irving needed to hear. Irving can't preach about his younger teammates needing more experience or question their work ethic and expect to respond on the court when aside from Irving, the eldest players haven't been very consistent throughout the regular season.

Veterans like Irving, Horford, Smart and Hayward need to set the standard of what it takes to deliver night in and night out as the Celtics continue the second half of the season. And not only against conference topping teams like the Raptors but against lower tier opponents such as the Grizzlies, Hawks and any other teams that stand in the Celtics' way of gaining traction in the upper echelon of the Eastern Conference.

Celtics: For the second straight game shot over 50 percent from the floor