Kyrie Irving promises not to ‘Question my teammates ever again’ 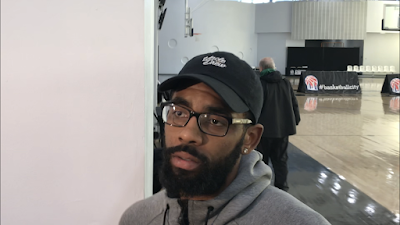 BROOKLYN – When Kyrie Irving requested a trade from Cleveland in 2017, he was sent to Boston – a place that most people considered was an ideal situation for him.

It not only gave him an opportunity to lead a team while being the focal point of the offense, but it was also a chance to mentor talented young up-and-coming players while competing for a title. As a player with a championship pedigree, who knows what it's like to play for a team with high expectations, Irving brings a unique perspective to the Celtics.

He remembers what it took for him and the Cavaliers to reach the top. It's what has shaped Irving into the player he is today but back-to-back losses in Miami and Orlando on top of a potential game-winning play that wasn't executed to his liking fueled his frustration to a boiling point.

Following Saturday's loss against the Magic, 'experience' was a common theme throughout what turned into a post game rant. At Monday morning's shoot around in Brooklyn, Irving picked up where he left off, reminding everyone of just how important experience is in the NBA, while also reminding reporters of just how meticulous he is off the court when it comes to studying game film and his opponents.


"You get the experience through games and being in certain situations, circumstances," Irving explained. "People being out, people in, everybody's healthy, plays run at the end of games, sets that we know are going to be run against us – defensively, offensively –just knowing the flow of the game and knowing the opponent. I watch so much basketball when I leave here, I'm obsessed with it (and) the opponents I'm playing against.

"I have our team film and then I have my individual film that I watch and I'm just studying guys so that when I go out in the game it's not anything I'm confused on. I've been playing it for a while. I feel like I was chosen to play basketball so when I go home I literally just obsess over basketball; that's my job."

Balancing his personal expectations along with having patience with his teammates is something Irving is trying to work on. He publicly chastised Gordon Hayward for getting the ball to Jayson Tatum in the final play of Saturday's loss and questioned his team's desire and work ethic in the visitor's locker room moments afterwards.

However, Irving says that's in the past and vows to never make the same mistake in the future.


"When you win, you want to taste it again," Irving said. "I never want to come from a place where I don't want to sound like I don't want to win a championship. Sometimes I may come off and say things – never to question my teammates in public like that ever again but I just want to win so bad.

"I came from a place where I asked for a trade and I come in here and I believe in this organization and I want these young guys to be successful. In order to do that we all have to all be on the same page, have that mindset; 'a championship or nothing.' Sometimes that can get the best of me at times."

Irving will be in street clothes when the Celtics take on the Nets Monday night in Brooklyn as Boston will look to avoid a win-less three-game road trip.