Aron Baynes, Marcus Smart listed as questionable vs the Raptors 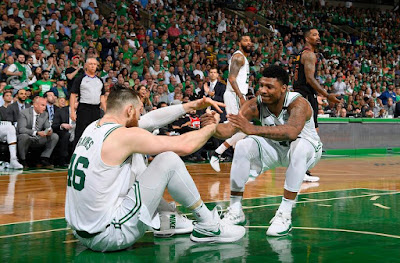 The Celtics might have a healthy roster for the first time in a few months, as center Aron Baynes (hand) has been listed to questionable for Wednesday's nationally televised game against the Toronto Raptors.

Marcus Smart (illness), who sat out against the Nets, has also been upgraded to questionable, according to the Celtics Twitter account


#NEBHInjuryReport for tomorrow vs. Toronto:


Baynes has missed the last 13 games with a left fourth metacarpal fracture that he suffered in the Celtics loss to the Suns back on December 19. If the big man were to return against the Raptors, it would be exactly 28 days since the injury occurred. Baynes was originally given a timetable of 4-6 weeks to recover from surgery on his left hand.

Kyrie Irving also missed the Celtics loss in Brooklyn on Monday with a left quad contusion, but was not listed on the team's injury report. The All-Star is expected to play tonight.

The Celtics will host the Raptors at the TD Garden for the second time this season, beginning at 8 PM EST on ESPN.