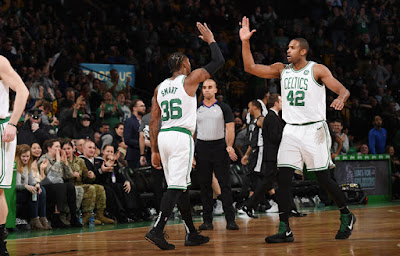 The Celtics put together one of their best defensive performances of the season Monday night at TD Garden.

They not only set a franchise record en route to a 112-104 win over the Nets, but they demonstrated the kind of dominance on the defensive end of the floor that sucked the life out of Brooklyn and hopes of regaining its tiny three-point lead. Boston's 16 blocks tied a franchise record; Al Horford led the way with more than half (6), Aron Baynes finished with three and Jayson Tatum and Marcus Morris each had a pair.

Horford only needed the first half to reach six blocked shots, which resonated with the rest of his teammates as they held the Nets to a 37.9 percent clip from the floor and forced 17 turnovers. They also held Brooklyn to 16 points in the final frame.

What was the key to great fourth-quarter defense?


"Being locked in and staying focused," Marcus Smart replied. "Coming in at halftime we knew that they (Nets) were going to come out in the third quarter and play the way they did. They have been doing it all year. Unfortunately, we have been struggling in the third quarter so we had to really lock down on that and once we stopped the bleeding the rest was history, of course."

Smart dominated on both ends of the floor. His 21 points on 7-of-15 shooting, including 4-of-10 from deep, led the offense that saw six Celtics players score in double figures while his five steals on the defensive end made a tremendous difference.

Jaylen Brown also finished with 21 points, Aron Baynes added 16 points and Al Horford filled the stat line (14 points, 11 rebounds, 5 assists, 6 blocks). As for the Nets, D'Angelo Russell found his offense early and often on his way to 25 points in 23 minutes of playing time, however, his rebounding effort wasn't up to par to coach Kenny Atkinson's expectations, thus, Russell was benched for most of the fourth quarter -- when the Nets truly needed offensive production.


"It was rebounding in the zone and I felt like there were a couple of rebounds he could have gotten in there and got," Atkinson explained after the game. "Teachable moment, then we made some subs and I thought the subs were playing good so just kept it that way. Also, in mind that we have another game tomorrow night; all of that played a factor."

Boston has now won six of its last seven games. They'll look to make it seven of eight Wednesday night when they host the Hornets at TD Garden -- the fifth and final game of its five-game home stand.

Celtics: Al Horford came three blocks shy of tying Robert Parish and Kevin McHale for the franchise record of most blocks in a single game (9). Horford has recorded a double-double in each of his last three games, it's the first time he's reached such a feat as a member of the Celtics.

Roxbury, Massachusetts native Shabazz Napier made his return to the Garden, finishing with 20 points on 4-of-8 shooting from behind the arc, to go along with 5 assists in 26 minutes off the Nets' bench.