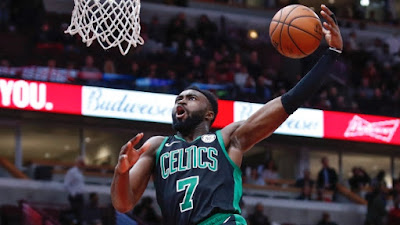 The Celtics have finally found their stride.

They're not only riding high on a five-game winning streak, the Celtics are crushing teams in the process -- which is exactly what they're supposed to do. If you're a champion contender, this is what's supposed to happen.

After topping the Cavaliers by 32 points and blowing out the Knicks by 28, the Celtics made history in Chicago -- where they annihilated the Bulls by the tune of 56 points (133-77). It's the largest margin of victory in franchise history.

Fitting for a group with championship aspirations, beating a team currently sitting in the cellar of the Eastern Conference. Beating up on lowly competition is certainly a sign of a champion in the making and it also shows the level of focus Brad Stevens has his team at in early December.

Starters are supposed to hang out on the bench in the fourth quarter against NBA lottery-leading teams. Just ask the Warriors how many times their starters found themselves cooling off on the bench throughout the course of the regular season.

However, this wasn't the case a couple of weeks ago for the Celtics. Boston had to figure things out before it could find the proper continuity.

Jaylen Brown led the team with another 20-plus point night. His 23 points led seven Celtics players in double figures and Daniel Theis, who got the start over Al Horford (sore left knee), added 22 points, 10 rebounds and five assists.

Still, this is the same team that dropped games against the Magic, Knicks and blew a handful of leads that translated into losses before their biggest winning streak of the season. All of a sudden, Boston is on pace to become the best team in the East before two marquee matchups this month against the Bucks before facing the Sixers on Christmas.

The Celtics have turned into the hottest team in the league, averaging 126.2 points a night throughout their last five games and are looking like the kind of team everyone expected prior to the regular season. Kyrie Irving said it best when he emphasized that the team wasn't having fun, rather than take things lightly and play within the confines of Stevens' system, egos got the best of guys.

Rather than trusting the game plan, players had other ideas on what needed to be done and when they didn't see the results they wanted, sulking and deflation was vividly apparent on the sidelines and in the locker room. Irving has noticed that players are now carrying themselves differently, they're on their feet supporting their teammates, staying positive, correcting each other and having fun while putting the team before their own personal goals.


"I mean, obviously it's been very good for us, winning our last couple games, so we want to keep it going," Terry Rozier said following Saturday's win. "And everybody can shut up because everybody can be very annoying when we're losing. Very annoying."

The Celtics won't have to worry about hearing any complaints this time.