Celtics will be without Kyrie Irving (eye) against the Mavericks 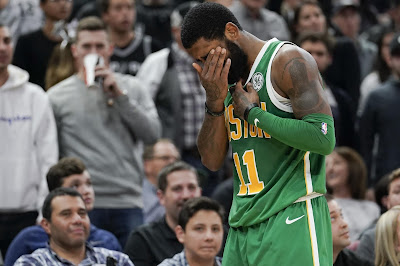 The Celtics will be without Kyrie Irving for at least one more game, after the team announced that the All-Star had been ruled out with eye inflammation for Friday night when the Dallas Mavericks visit the TD Garden.

Irving suffered the injury during the Celtics loss to the Spurs on Monday when Marco Belinelli swiped him in both eyes while going after a loose ball.

Celtics president of basketball operations Danny Ainge said on Thursday that he didn't think Irving would be out long-term, but also wouldn't put a timetable on when he'd return to the lineup.


"Just visually, he has some swelling, and he's wearing sunglasses. It’s just an issue where you don’t want it to happen again," said Ainge on Boston's 98.5 The Sports Hub.

Boston (22-15) began their four-game homestand on Wednesday night with a 115-102 win over the Minnesota Timberwolves, where Gordon Hayward recorded a season-high 35 points off the bench, after going scoreless on New Year's Eve in San Antonio.


"It lifts us up seeing him and everything that he's been through," Marcus Smart said following the win at home. "And to see him keep fighting and come out here and finally feel comfortable is something this teams needs moving forward."

Marcus Morris, who left Wednesday night's game with a stiff neck after falling on the court hard in the second half, told reporters that he felt "sore as hell" and he's been listed as 'questionable' against the Mavs.

Terry Rozier will get his second straight start, following a 16 point and 5 assist performance against the T-Wolves, when the Celtics host Dallas (18-19) on Friday. Boston will look to avenge a loss to the Mavericks back on November 24.