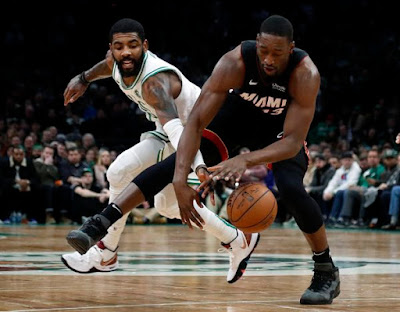 Celtics All-Star point guard Kyrie Irving has never been applauded for his defensive prowess. It was actually the biggest knock on his game when he was dealt to Boston.

Back when Isaiah Thomas was sent to the Cavaliers in 2017, skeptics quickly pointed out the fact that even though Irving is a much taller point guard than Thomas, his defensive rating was eerily similar to the 5-foot-9 former Celtic.

At the start of the regular season, Irving confessed that throughout his career he didn't always try his best on the defensive end of the floor and was making a conscious effort to become a better defender. That effort came shining through Monday night against the Heat.

Irving finished with a career-high 8 steals as the Celtics managed to avenge their loss in Miami en route to a 107-99 win at TD Garden. He was two steals away from a triple-double (26 points, 10 assists) and stretched his streak of scoring at least 22-plus points to six straight.

After the Heat turned their 22-point deficit into a two-possession game, Irving fired off six consecutive points that kept Miami at bay towards the end of the final frame. He led the charge as he went into his closer role once again, shutting down the Heat's hopes of a potential comeback.

This is a special time for Irving. It feels like ever since his conversation with LeBron James, he's found a special rhythm on both ends of the floor. Throughout his last four games, he's averaging 30.7 points while shooting 60.1 percent to go with 11 assists and 2.5 steals a night.


"I felt good," Irving said. "I got lucky on a few of them so that helps the stat sheet but I turned the ball over a little too much after a few of those steals just being really excited that I got one. That's awesome though."

While steals is a statistical category that doesn't necessarily define a player as a great defender, it is a good measuring stick to determine a player's effort. Irving, who tends to gamble a lot when he's going for a steal, has however, done a solid job of staying in front of his assignments.


"He's been good about locking in and honing in on the defensive end," Stevens explained after the game. "He was active with his hands, he was active on tags on the baseline. I just thought he was really locked in."

Since Stevens added Marcus Smart to his starting back court, feels like the two guards have rubbed off on each other, thus, have complimented one another nicely. While Irving's defensive numbers have gotten better, Smart's shooting percentages have sky-rocketed.

Smart is shooting a career-best 41.3 percent from the floor, including a 36.8 percent clip from behind the arc. Meanwhile, Irving's defense hasn't gone unnoticed as his back court mate has become Irving's security blanket in moments he feels free to jump a passing lane or when he's forcing a double-team against opposing scorers.

Celtics will look to extend their nine game winning streak at home on Wednesday when they take on the Cavaliers at TD Garden.

Celtics: Heat finished with 20 turnovers against the Celtics -- for the second game in a row, Boston forced 19-plus turnovers