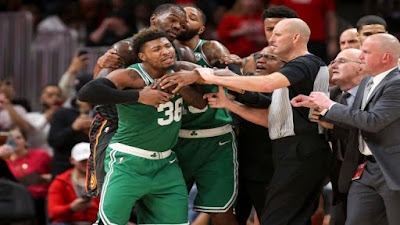 The NBA has fined Celtics guard Marcus Smart $35,000 for his actions on Saturday night against the Atlanta Hawks, following being ejected.

NBA executive vice president of basketball operations Kiki VanDeWeghe released a statement on Monday which said that Smart was fined "for aggressively pursuing an opponent in an attempt to escalate a physical altercation and failing to leave the court in a timely manner following his ejection."

Smart was hit with his first tech three minutes into the third quarter before an altercation with Hawks' forward Deandre' Bembry led to a second technical foul and being ejected.

Smart and Bembry were separated after words were exchanged between the two, as players were lining up for a jump ball. Smart was restrained by teammates and coaches before he broke free and ran towards Bembry before being held back for a second time.

Following Smart's ejection and a video review, Bembry was called for a technical foul as well.

Bembry didn't think it was not out of the ordinary for Smart to lose his cool, especially once the referees tossed the Celtics guard out of the game.


"He lost his cool after the ref told him he's ejected," Bembry said. "I think after that he just thought he had nothing else to lose."


Smart, who some believed would be facing a possible suspension, did not speak with the media following the Celtics win over the Hawks.