Celtics 123, Cavs 103: Terry Rozier turns in his best game of the season 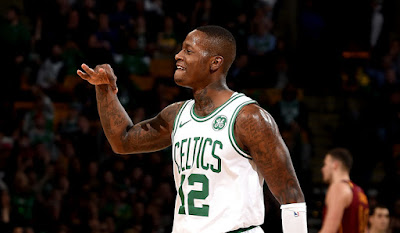 Celtics point guard Terry Rozier is one of the league's most intriguing impending free agents.

He hasn't lived up to the expectations that was bestowed upon him entering the regular season. Although if you expected him to match the kind of production we saw throughout last year's Celtics playoff run, that was a huge mistake, considering Kyrie Irving's return to the starting lineup was going to force Rozier to return to his secondary role and his numbers were destined to take a hit.

However, seeing Rozier match the kind of numbers we saw throughout the entire 2017-18 regular season was a reasonable benchmark. Instead, Irving's understudy's numbers are down across the board; Rozier is averaging 8.4 points -- three points shy of last season's average -- while shooting 34.2 percent from behind the arc, whereas he shot nearly 40 percent one year ago.

Aside from his outing in Brooklyn last week, Rozier typically steps his game up on nights when Irving has the day off and with Irving out with flu-like symptoms, Wednesday night's game against the Cavs at TD Garden was his best performance of the season. You couldn't have asked for a better first half.

He scored 22 points and was perfect from the floor on 8-of-8 attempts before eventually finishing up with 26 points, 8 rebounds and 6 assists while the Celtics topped the Cavs, 123-103. It was the kind of night reminiscent of the ones that made Rozier a star throughout last April and May, especially at home -- where he lit teams up and in some instances was arguably the best scorer on the floor.

Now, if the Celtics could only have as much as half of this kind of offense off the bench from Rozier on a night-to-night basis; the team would be in excellent shape and Rozier would be setting himself up for a huge payday. Unfortunately, that hasn't been the case but Brad Stevens is hoping Wednesday night is just another positive sign of bigger things to come.


"Ultimately, I think Terry's played not only well tonight but has had, a better part of the last few games, has been very good," Stevens said. "I'm really encouraged by him, he's a great guy as we've all talked, with his work ethic, desire to get better. (He) never says a word about the days he doesn't start. He just comes in, tries to play his hardest, so really encouraged and hopefully he can carry it over."

If only he could find consistency, or is he approaching the game differently on nights that he's a starter?


"I wouldn't say it's different," Rozier replied. "I know that I'm going and I'm going out there right away, so I can get myself ready for that. It's kind of different but at the same time, just trying to be effective either way."

It was around this time last season when Rozier flipped the switch. The Celtics are hoping he does the same in 2019, especially in the springtime.

Irving's backup won't get the kind of minutes he received last spring unless he forces Brad Stevens to keep him in the game and the only way he can do that is by putting together great offensive performances -- which will go a long way for Rozier when he's ready to ink his new deal. As Irving's insurance policy, Rozier will most likely be leaving Boston for greener pastures come July.

Unless the All-Star point guard retracts his promise to stick around, the Celtics have no need to keep an overpaid backup around. But before a decision is even made, the Celtics are hoping Rozier can revive that same player we saw that earned himself the 'Scary Terry' nickname back in 2018; it could ultimately be the difference between a Eastern Conference knockout and clinching the NBA Finals.

Celtics: Forced 20 turnovers while shooting 52.3 percent from the floor