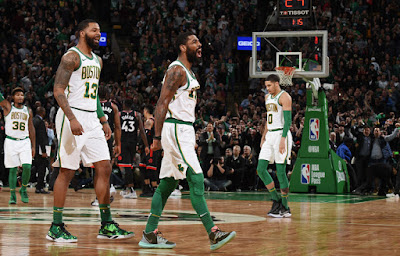 The Celtics dropped a 105-103 loss against the Magic and Jayson Tatum missed a potential game-tying shot before the buzzer, however, what stood out most from Saturday was Irving's behavior on and off the court. From the moment Gordon Hayward's inbound pass reached Tatum's hands, Irving threw his arms in the air in disapproval before Tatum got his shot off and watched the ball bounce off the rim as time expired.

Irving immediately yelled at Hayward, stormed off the court and proceeded to the locker room before he called out his team while speaking to the media. He wanted the opportunity to take the final shot but instead of explaining himself to Hayward in the locker room, he did in public and then later questioned his teammates' work ethic, experience and subsequently phoned LeBron James.

After the Celtics topped the Raptors, 117-108, Irving revealed that Saturday's loss to the Magic ultimately led to him calling James. He apologized to his former teammate, admitting that he wasn't the best teammate throughout the early years of playing alongside each other, and that he finally understands what James had to endure; the challenge of being a great player and constantly doing your best to get the very best from your team.


"I had to call and tell him, I apologized for being that young player that wanted everything at his fingertips," Irving said. "I've been the young guy, being a 22-year-old kid and I wanted everything. I want everything right now. Coming off an All-Star, starting, and this heck of a presence coming back and now I have to adjust my game to this guy."

The adjusting hasn't been easy. Although Irving ultimately apologized for his outbursts two days later in Brooklyn, that didn't stop Jaylen Brown from taking a dig at his starting point guard for pointing the finger at particular players instead of accepting the blame as team.

"JB (Jaylen Brown) was right, I have to do the right things and not point fingers at individuals."

The trying season compelled Irving to reach out to James, someone that he played with in countless meaningful games throughout deep playoff runs and  marquee regular season matchups.


"Having that moment to be able to call a guy like that where we've been through so much, where we won a championship together, where we're one of 31 teams, 32 teams to ever do something like that," Irving said. "It takes a real man to go back, call somebody like that.

"It takes a real man to go back, call somebody and be like, 'hey, man. I was young. I made some mistakes. I wasn't seeing the big picture like you were. I didn't have the end of the season in mind. I just wanted to get my stats and make All-Star games.'"

It sounds like it was a conversation Irving needed to have. Hayward, Al Horford and Irving each scored 18-plus points in the same game -- for the first time ever in Boston while Irving dropped 27 points to go with a career-high 18 assists, fitting for a team that needed a season-defining win.

The well balanced production was enough to top Kawhi Leonard's game-high 33 points and Serge Ibaka's double-double (22 points, 10 rebounds) while Kyle Lowry, who finished with 10 points on 3-of-10, had a rough shooting night.

At this point in his career, in a role he's never quite been in, Irving needed to head back into the days when he was in his young 20's, consider what it must have been like to be in LeBron's shoes and asked James for help in filling in the gaps.


"It was just good," Irving explained. "And it gave me a peace of mind to go about what I have to do. Obviously, I'm going to be competing against him (James) the best and everybody else in the league. But it was good."

Celtics: Shot 50 percent from the floor, including 14-of-30 from deep and finished with 32 assists