Anthony Davis tells the Pelicans he will not re-sign, wants to be traded 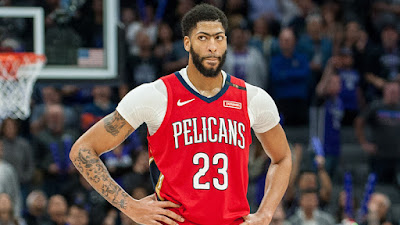 Pelicans All-Star forward Anthony Davis will reportedly not sign an extension and has asked to be traded, according to his agent Rich Paul of Klutch Sports.

Paul told ESPN on Monday morning that Anthony has no intention of re-signing to remain in New Orleans.


"Anthony wants to be traded to a team that allows him a chance to win consistently and compete for a championship," Paul told ESPN. "Anthony wanted to be honest and clear with his intentions and that's the reason for informing them of this decision now. That's in the best interests of both Anthony's and the organization's future."

Agent Rich Paul has notified the New Orleans Pelicans that All-NBA forward Anthony Davis has no intention of signing a contract extension if and when presented and that he has requested a trade, Paul told ESPN on Monday.
— Adrian Wojnarowski (@wojespn) January 28, 2019


Davis, who has one more year left on his current deal, is still eligible this summer to sign a supermax extension of five-years, worth $240 million, while he could also become a free agent in July of 2020.

The timing of Davis' demand to be moved comes only 10 days before the NBA trading deadline and the Pelicans have yet to express any desire to deal away their franchise player prior to February 7.

While the Celtics remain at the front of the line with the most assets including draft picks and young talent that would interest New Orleans the most, news that Davis wanting out now gives other teams a shot to package together their best trade offer for the Pelicans big man.

Boston cannot trade for Davis, unless Kyrie Irving were to be included in such a deal, until July 1 due to Irving and Davis' current contracts being under the designated rookie exception. The two olympic gold-medalists signed six-year max extensions, meaning no teams can acquire two players who have been signed under the designated rookie exception, which is also known as the "Rose Rule."

Irving could opt out of his deal and become a unrestricted free agent on July 1, while the Celtics could also agree to a Davis trade before then and it won't be finalized until after that date.

The Los Angeles Lakers will look to be one of the many teams that put together a trade offer for Davis before Danny Ainge gets a chance to picks up the phone. It's no secret that Magic Johnson has been determined to pair Davis with LeBron James, who is also represented by Rich Paul and Klutch Sports Group.