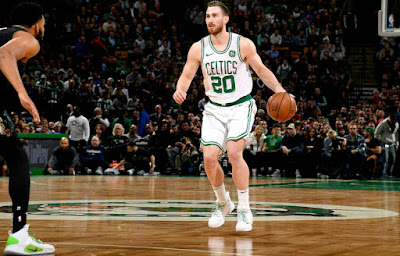 Since the start of the regular season, Gordon Hayward has shown flashes of greatness for the Celtics. But finding consistency has been his biggest issue.

We've seen Hayward reach scoring highs that most of his teammates haven't come close to reaching and we've also seen him hit rock bottom. There hasn't been a whole lot of in between, Hayward's point-total typically fluctuates between lackluster and extraordinary.

As for rock bottom, you don't have to look too far down Hayward's game log to see a goose egg in the point column -- it came on New Year's Eve in a 22-minute performance against the Spurs. However, he didn't need much time to bounce back with his best game of the season.

Hayward's 35 points against the Timberwolves in Wednesday night's 115-102 win was easily one of the best individual performances we've seen by any Celtics player this year. He meticulously dissected Minnesota's defense for open looks and netted 14-of-18 from the field, including 4-of-7 from deep -- where he caught fire down the stretch.

Hayward surpassed his previous season-high of 30 points that came against the same Timberwolves team in Minnesota on December 1. However, by Brad Stevens' estimation the opponent is merely a coincidence.

According to Stevens, it was only a matter of time before Hayward was going to find efficiency on his way to a 30-plus point game like we saw Wednesday.


"He's going to make a lot of shots because he's got a lot due," Stevens said after the game. "You know, he was disappointed in how he shot the ball obviously in San Antonio and got back in the gym this morning and you can tell he was going to play pretty well. I mean, 14-of-18 is an unbelievable night and you're not always going to shoot it like that. But you could tell he was pretty locked in and was going to play well."

Hayward was a far cry from his 0-for-6 game against the Spurs but it didn't look pretty throughout the entire first half Wednesday night at TD Garden. After a slow start against the Timberwolves, Hayward wasn't discouraged from finding his focus as he was able to lock in and contribute at a high level offensively.


"In the past, definitely, even during this season (and) as a young NBA player -- if I missed my first couple shots, it probably wasn't going to be a good game," Hayward said. "But like I said, I think the credit's due to my teammates for getting me open looks. That kind of gets you going. You see the ball go through the hoop and it gives you a little bit of confidence. Getting stuff in transition, some easy ones, kind of get yourself going, that stuff always feels good."

Karl-Anthony Towns, who got off to a slow start thanks to Al Hoford's stifling defense, eventually found his offensive rhythm in the second half on his way to 28 points, 12 rebounds and 7 assists. Andrew Wiggins led with a team-high 31 points and Tyrus Jones' 14 points, 9 assists and four steals led Minnesota's second unit.

Five Celtics players finished in double figures, including Terry Rozier (16 points), who got the nod to replace Kyrie Irving (eye) in the starting lineup. He also finished with five steals and Horford filled the stat sheet with 15 points, 5 rebounds, 4 assists and two blocks.

Following a 35-point performance, Hayward isn't ready to call Wednesday night a turning point. While keeping a realistic perspective in mind, the Celtics' eight-year forward believes he'll feel a lot more like his old self at the tail-end of the regular season rather than near the halfway mark.


"I think it' slowly getting there," Hayward said. "I think my lateral movement, it's so much better since the beginning of the season but I think that's pretty close to where it was. I think vertically, I still have a little ways to go. My ankle is a little sore right now but I think in April and May, it'll be better than it is right now. I'm still doing stuff for my ankle every day, trying to get it better."

Celtics: Finished with 52 points in the paint and also never trailed the Timberwolves once throughout the night