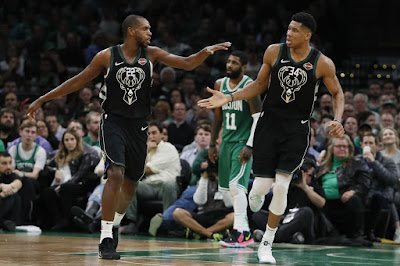 When Kyrie Irving was shipped from Cleveland to the Celtics for Isaiah Thomas in one of the most unpredictable trades in recent history, Irving's leadership was almost immediately called into question.

The perennial All-Star with a championship pedigree was finally out of the shadows of LeBron James and ready to spread his wings and lead a group of young talented players alongside two established veterans in Al Horford and Gordon Hayward. The inaugural campaign didn't quite go as planned.

Hayward missed the entire season, Irving suffered a season-ending knee injury but the 2018-19 Celtics season was projected to be the year Brad Stevens would see his team reach its full potential. Well, that hasn't gone as smoothly as most would have anticipated either.

With 31 games in the books, an eight-game winning streak in the rear view and the Celtics in the midst of a three-game losing skid, things are trending downwards and spiraling out of control. After losing to the lowly Suns Wednesday night, the Bucks defeated the Celtics, 120-107 at TD Garden Friday.

Giannis Antetokounmpo dropped a game-high 30 points to go with his 8 rebounds and 5 assists. Khris Middleton tallied 21 points, connected on four treys from deep, pulled down 8 rebounds and finished with 5 assists.

Jaylen Brown's 21 points off the bench led five Celtics players in double figures. Jayson Tatum added 20 points and Kyrie Irving's added 15 points but was streaky behind 7-of-20 from the field to go with his 9 rebounds and 7 assists.

The Bucks were tremendous offensively, they were able to get any kind of shot they wanted and produced at a high level while shooting 51.3 percent from the floor. They also finished with 46 points in the paint and reminded everyone why they lead the league in scoring (117.4).

Following Stevens' press conference -- when media members typically make their way down the hallway to the Celtics locker room -- it took 35 minutes for the Celtics to open its doors for media availability. Once the doors finally opened, Jaylen Brown and Jayson Tatum each explained the team had an open discussion that included some members of the Celtics coaching staff after the elephant in the room -- what happened in the locker room after the game? -- was eventually asked but neither offered any specifics on what the team meeting was about.


"Just a team trying to get on the same page," Brown responded. "(We're) trying to do something special, trying to make sure we're all clicking on the same cylinders."


"That's just something we're supposed to keep in the locker room," he answered. "It's not for everybody to know what we talked about."

Irving, the third and final Celtics player who spoke to the media Friday night received a rephrased question: How would you characterize or describe what happened after the game?

It was an answer that immediately added strain to an already tense locker room as the Celtics point guard proceeded to provide insight to the challenges a championship-contending team faces throughout the course of an NBA season.


"I think that for us, sitting from where you guys are sitting -- thinking that in the off-season, that we're all like together 24/7 and that we're just supposed to come together, human beings, just coming to play the game that we love," Irving stated. "It's a lot easier said than done in terms of building a championship team or even having aspirations to be on that championship stage. It starts with our habits, it starts with our preparation, how we go about treating each other and going out there and putting on a great performance every single night regardless if whether the ball is going in the rim or not, just trusting one another.

"That's an every day thing. I know that everyone would like to think that, 'hey, what's going on?' and it's just not easy, it's an every day job. I've been saying it since the beginning of the season. It's not going to look pretty, it's not going to look great at all times but the biggest thing for me is just patience and I think also, just being honest with one another. How we feel and being able to talk to one another without anybody taking personal."

Things took an interesting turn when Irving was asked about the difficulty of balancing when to take matters into his own hands on the court and when to lean on his teammates.


"Truth is; I'm not necessarily playing the minutes that I would want, the role that I would want, the role that selfishly I would want for myself and that all goes in the back-burner in terms of being patient with what I have to do to grow as a leader of this team and help these other young guys be more prepared for what they will encounter as they get older in this league and then what we're going through right now. That's the part-deal that I have of not just worrying about how many shots I'm getting or how successful I am out there on the floor.

"It's how successful are we as a team and what can I do to really make these guys feel more comfortable out there and just doing more to just make sure that their success matters as much as mine. That's really the important thing -- just consistency with that and being patient with them."

For some, it's a bit concerning to hear the leader of the Celtics open up about not playing the role that he wants. Or, this could be the voice of a point guard demonstrating to his teammates that it's going to take more sacrifices from one another in order for a team to be successful, and those sacrifices start and end with  him.

Frustration is clearly at an all-time high, especially for a team that has now lost three straight games and has a challenging schedule ahead of them. Still, Irving's approach came off as snarky, and in bad form. However, should anyone be surprised?

It was the kind of comment you could find from an old LeBron James press conference that a younger Irving grew tired of hearing before subconsciously rising to the occasion just when his team needed it most. Irving is hoping his teammates will respond in a similar manner.

Let's not forget Irving is a student of LeBron, the best basketball player in the world who he competed with for three years, played in three NBA Finals and earned one title. Much like James, he's going to remind you how great he is from time to time, hold teammates accountable and tell you his patience is never wearing thin.

This is the kind of leader the Celtics acquired to bridge the franchise's gap into the next era of championship-contending basketball, and whether you like it or not in December is irrelevant -- its success isn't built for the short-term, it's about what will happen when Boston is close to the finish line.


"For me it's a hard challenge, it's a balance that I have," Irving explained. "I literally can do anything I want out there, anytime I want but at the same time it's what can I do for my team to be more successful."

Sounds like a James quote to me. But maybe that's not the worst thing in the world, maybe it's just the turning point we've all been waiting for.

Bucks: Shot 40 percent from behind the arc -- it's the fourth time this season a Celtics opponent shot 40 percent or better from deep. Boston is 1-3 against teams that shoot from that clip.