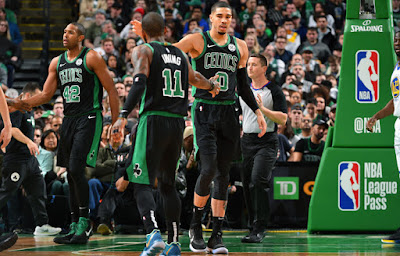 The Celtics have come a long way from where they were at the start of the regular season. But there’s still plenty of work to be done.

When it comes to facing the top teams the league has to offer, the Celtics bring their A-game. They welcome all challengers, and when it came to going toe-to-toe against the champion Warriors, the Celtics turned in one of their best performance of the year.

Boston would have preferred a different outcome — the 115-111 loss, which snapped its ten-game winning streak at home — but there's plenty of positive takeaways from Saturday night. For starters; the Celtics can keep up with the back-to-back champs.

For three quarters, the Celtics survived Steph Curry’s 19-point second-quarter offensive explosion, Kevin Durant’s domination and then responded with fourth-quarter offensive runs that kept them neck-to-neck with a chance to pounce on another win. However, their shortcomings down the stretch ultimately decided their fate.

The Celtics gave up offensive rebounds, failed to capitalize on golden opportunities and committed crucial fouls that led to easy points from the charity stripe for the Warriors. Kyrie Irving, who finished with a team-high 32 points for the Celtics, nearly carried his team to a win but late-game execution didn't go his way when he had a chance to potentially send the game into overtime.

Marcus Smart and Marcus Morris had the same chances -- opportunities that fell on the Celtics' lap over and over again but Boston couldn't drain the big shots.

"I think we came in and we expected to win, so we need to get better so that we can have a better chance of winning that game," Brad Stevens said after the game. "We have the last few years and today we didn't."

A couple of months ago, the Celtics wouldn't have had a chance in keeping up with the Warriors. Irving did a tremendous job of balancing his moments to attack and finding his teammates and even though Smart and Morris didn't convert, it's building trust between them -- which will resonate throughout the team.

In the long-run, Irving's supporting cast will be confident, ready and experienced in taking big shots when their names are called. The Celtics are hoping 30-plus games will be enough to get them to where they need to be come playoff time, and Saturday was a promising sign.

Boston withstood blow after blow, countered with a well-balanced attack where Irving, Al Horford and Jayson Tatum combined for 74 points. Irving knows the playoffs will bring a different team than the one we saw Saturday, and couldn't even stand to hear the terms 'playoff-like atmosphere' mentioned by a reporter in describing Saturday night at TD Garden.

"No it was not," Irving responded. "No. It's the regular season.

Even with all the hype?

"What hype? Irving asked. "Hype created by everybody else. It's pretty much a regular game just with the best of the best playing, just with the TV's and the million of people watching, that's it. Playoffs are totally different."

Consistency was an issue early in the season for the Celtics but it wasn't throughout the course of the entire game and if Boston can keep that up, they'll be get passed the Eastern Conference contenders and eventually welcome the NBA champs back to Boston in June for a run at the 2019 title.