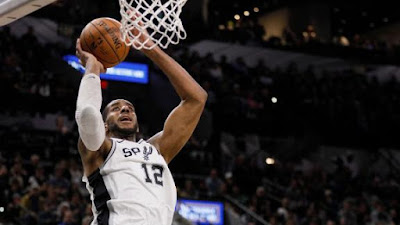 The success of Brad Stevens' teams have always been predicated on great defense.

It's typically the backbone of why nearly every season throughout Stevens' tenure in Boston the Celtics have exceeded expectations.

However, for the first time, a Stevens-led Celtics team is actually under-performing.

Expectations have never been this high, however, the recent struggles on the defensive end are starting to decide the outcome of games and with the losses stacking up, Stevens will have to figure out a way for his team to bounce back. Boston has dropped four of its last sevens games while allowing an average of 119.5 points in all four losses.

Monday's 120-111 loss to the Spurs was easily the most alarming defeat. The Celtics gave up a season-high 46 points in the third quarter -- where San Antonio created its double-digit cushion and essentially never looked back as the Celtics couldn't find their offense throughout the final frame.


"46 points were tremendous," Stevens said after the game. "It started with them just physically overpowering us, getting to the rim clearly like a mindset of we're going to go to the rim and make you stop us from a physical prospective. Then once we started really sucking in, they started spraying it all over and making every shot. They did a really good job of exposing us throughout that whole quarter."

The well-balanced attack by the Spurs was too much for the Celtics to bounce back from. San Antonio scored 48 points in the paint and drained 14-of-26 from behind the 3-point arc. LaMarcus Aldridge dominated the key -- where the bulk of his game-high 32 points came from.

Meanwhile, Jaylen Brown's 30 points didn't translate into a momentous shift for Boston. Instead, it was Kyrie Irving's fourth-quarter injury -- which momentarily sent him to the locker room while the Spurs continued to pour it on -- that signaled the beginning of the Spurs putting the finishing touches on another win at home, where they improved to 15-5.

Irving suffered a scratched eye in the midst of the fourth quarter -- where the Celtics' final attempt at making a comeback eventually fell short. Although Irving did return to the floor a few minutes later, the damage by the Spurs was already done.

At times throughout the third quarter it seemed as if the Celtics just weren't putting forth the necessary effort they needed to slow down the Spurs. In the paint, Aldridge got the best of Al Horford, dominated Daniel Theis and took advantage of favorable match-ups when the Celtics found themselves on the bad end of a defensive switch.

Boston is not only have the third-best defensive rating (1.023) but are also third in opponent 3-point percentage (33.6 percent). However, the Celtics have dropped from the top tier to sixth in the NBA in points allowed -- averaging 106 a night.

The recent stretch of giving up nearly 120 points a night throughout four losses is certainly a sign of complacency for a team that tends to rely on Irving's late-game scoring and big time comebacks. If things don't turn around from a defensive standpoint, the Celtics may need to look into the buyout market for a defensive specialist or pull the trigger on a deal sometime down the road.

Until then, the Celtics hope a four-game stretch of home cooking will mediate their shortcomings -- which starts Wednesday night against the Timberwolves -- for now.

Spurs: Shot 76 percent on 19-of-25 attempts, including 5-of-5 from deep in the third quarter. It was the first time since 2000 that the Celtics allowed 46 points in a quarter