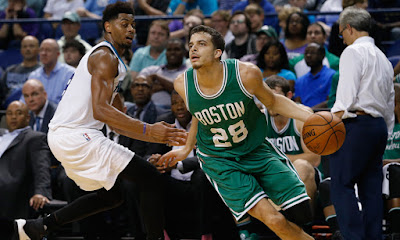 The Celtics officially announced the signing of guard RJ Hunter on Thursday via social media ahead of the team's matchup against the Miami Heat.


Coach Brad Stevens spoke about the return of Hunter, who was the Celtics former No. 28 pick back in 2015, and his new current two-way contract.


"It’s a neat story,” Stevens said. "I think one of the toughest things that I’ve been a part of over the last six years was when we had those 16 guaranteed contracts in the fall and we had to make a decision on one."

The Celtics selected three players in the 2016 NBA Draft, after not being able to include any of those picks in a rumored deal for a another All-Star, forcing Danny Ainge to cut Hunter at the start of 2016-17 season.


"We thought he was a high upside player that had really gotten better, that was going to work hard to be better," Stevens said. "So I think we’re all really excited that we’re able to have him back."

Hunter began the year with the G-League’s Erie BayHawks, averaging  22 points on 42.6 percent shooting (34.4 percent from 3), 5.6 rebounds, and 4.4 assists. Stevens says he's been paying attention to Hunter over the last two seasons.


"If he’s making shots, he’s a really hard guy to guard because I think probably his best attribute offensively is passing off actions, said Stevens. "So the shot-making really opens that up, and he’s been making them for the last two years."


Find out what else Stevens had to say about RJ Hunter below: