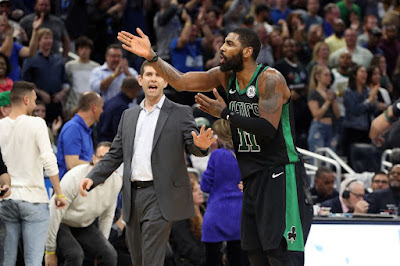 It's been quite a week for Kyrie Irving, who leads all Eastern Conference guards in this year's All-Star voting, while also making headlines for his questionable comments.

Irving publicly called out his teammates following the Celtics' loss to the Magic on Saturday night and called LeBron James to apologize for not understanding what it took to be a leader when the two were in Cleveland.

Call it growing pains if you will, but it's was very well documented that Irving wanted to lead a team on his own and not be in 'King' James' shadow anymore, thus Danny Ainge pulled off a trade that brought him to Boston so he could guide the likes of Terry Rozier, Marcus Smart, Jaylen Brown and Jayson Tatum.

Fast forward to these past few days, where the focus has been on Irving finger pointing, followed by an apology and a vow to never publicly question his teammates again, to being criticized about his surprising conversation with James.

Celtics coach Brad Stevens weighed in on Irving's leadership and what he called "good intentions" when it came to his point guard's words over the last seven days.


"I thought that, the way I read his comments the other night, was that there was a lot of reflection back on what he said and a lot of accountability and a lot of talk about how hard it is to be a leader,” Stevens said before Friday’s game against the Grizzlies. "The best part about it is, if you have good intentions, which without question he does, and like he said, he wants to win, he’s dying to win, he wants to be as good as he can be and do that for a long time, then those are things that are great challenges."

Irving returned to the court Wednesday after missing the Celtics loss to the Nets in Brooklyn, finishing with a double-double of 27 points and a career-high 18 assists against the league leading Toronto Raptors in a much needed win to snap a three-game skid.

Irving scored or assisted in the Celtics' last 25 points to cap an 11-2 run and extend their home win streak to seven straight, the current longest in the NBA. Talk about leadership at it's finest on the basketball court, something Stevens believes will go a long way in the locker room.


"Leadership starts with what you do on the court -- he was pretty damn good on Wednesday night -- and then it’s how you serve your teammates and then everything else is what it is,” said Stevens. "Everything else follows suits from those two things."

It's clear Irving is still learning how to be a leader of a team with championship aspirations, despite a long week of heavy scrutiny from the national and local media, the Celtics All-Star never meant for his comments to be hurtful towards his teammates, especially the younger players. If anything, the message we all can take away from this long week is simple... Kyrie Irving just wants to win.