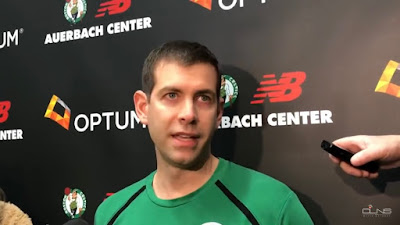 Boston's marquee matchup against the Warriors Saturday isn't just another game on the schedule for the Celtics.

Brad Stevens knows what they're up against, facing the champion Warriors -- the league's newest dynasty that's on the hunt for its fourth NBA title in five years. Weeks removed from winning the 2018 championship, the Warriors shocked the world when they inked one the league's most talented big men in DeMarcus Cousins.

Cousins, who was recovering from a season-ending Achilles injury at the time, signed a one-year $5.3 million deal with the Warriors and made his season debut last Friday against the Clippers. For a guy who's playing less than 25 minutes per game, he's looked pretty good so far, averaging 13 points and 7 rebounds in four games while the Warriors are riding high on a five-game winning streak ahead of their showdown at TD Garden against the Celtics.


"I think every team goes through their ups and downs of a season but they look like their playing at an elite level right now," Stevens said. "Anytime you add a guy like that (Cousins) and he's on a minutes restriction still or at least he's playing limited minutes. It just looks like everybody's got a little more bounce in their step, they're tough and I don't know if I've seen them play better during any regular season stretch since maybe the year they won 73 (games)."

The same can't be said about the Celtics, we've certainly seen better stretches led by Stevens. It's been a rocky year, full of turmoil, losing and winning streaks, much like the one Boston currently finds itself in at the moment.

Winners of five straight, seven of their last 10, the Celtics will face their biggest test of the season and it's just at the right time. The roster is at full-strength, its best player in Kyrie Irving is averaging 30 points throughout the winning streak and the measuring stick tell the Celtics just where they stand against the very best as Boston approaches its 50th game of the season.

However, Stevens believes his team's biggest strengths on both ends of the floor will reach itself against the Warriors -- a team that will not only challenge the Celtics but also their a team that Boston can learn from whether they win or lose Saturday.


"Over the last few years, they're the standard for the whole NBA," Stevens explained. "But it's not about style of play, it's just about they've put together a great group that fits each other well, that plays great together -- has played great defense and great offense. You can't emulate them necessarily because their guys are unique with what they do. You have to play to your strengths as a group. There's some things defensively that you take and then you look at as something you may apply to your team, some things offensively but there are some things that you don't feel too.

"But as far as the standard for the league, I mean clearly -- three out of the last four years being champions and being on the doorstep of a fourth before Kyrie hit that shot, I mean that's pretty incredible."